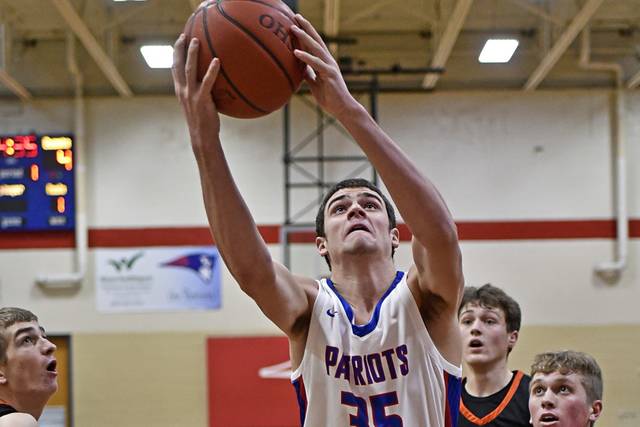 NEW MADISON – Two of the frontrunners in the CCC squared off and it was Tri-Village standing tall at the end by defeating Arcanum 47-35 in a defensive battle to remain undefeated on the year at 14-0 and 7-0 in the league.

It was a very deliberate and slow tempo to start the game and when Ian Baker fielder tied the game at 6 each at the 2 minute mark that suited Arcanum just fine.

But a triple from Dalton Delong and a steal and two-handed jam from Layne Sarver ignited the home team to give them an 11-6 lead to end the quarter.

Arcanum would remain poised and on game plan and pounded the ball inside to Chase Werling for 6 points, then got 5 from Jake Goubeaux and triple from Chad Pitzer outscoring TV 14-12 in the 2nd quarter and trailed by just 3 at the break 23-20.

Josh Scantland came up big in the 2nd quarter for the PATS scoring 6 off second chance points, enough to keep the Trojans from grabbing the lead.

“We didn’t shoot the ball well in the first half despite have a few really good looks and that’s part of the game,” Tri-Village coach Josh Sagester stated.

Neither team would shoot the ball well in the 3rdframe either as they deadlocked at 6 pointsheading into the final stanza with TV leading 29-26.

Tri-Village upped their defensive intensity which was good enough to hold the Trojans scoreless for the next 5 minutes creating separation on the scoreboard to go up 39-26 which pleased coach Sagester.

“Defensively I thought we were good all night long and that’s sort of our calling card and it made the difference late,” Sagester commented.

Arcanum’s Garret Garno finally broke the drought with a triple at the 2:59 mark … but it was going to be an uphill battle with the slower tempo to close the gap.

Arcanum tried to trap the Patriots and was successful in creating a few turnovers … but they also ended up fouling and TV benefitted going to the free throw line. They would make 9 of 12 to put the game away to record the 47-35 win.

After the game TV coach Josh Sagester was complimentary of Arcanum coach Roger McEldowney and his team.

“Obviously they wanted to be very deliberate and Roger does a really good job of trying to give his kids a chance to win and they battled us hard all night. We of course wanted a higher tempo and we were able to get that on some possessions and made just enough plays to win the game,” Sagester said.

Layne Sarver had a big 4th quarter with 8 points, 19 for the game. Josh Scantland had 14 big points in the paint, many off the glass at key times in the game.

“We call Josh our swiss army knife, against the 1-3-1 we have him out front to see what is out there, then we moved him to the block in the 3rd and 4th quarter to get him the ball there. He does a lot of whatever we need and he’s a great kid working really hard,” Sagester praised

Jake Goubeaux made a number of big shots throughout the game at critical times for Arcanum to keep them close, he ended with 17 points.

Arcanum falls to 9-4 overall and 6-2 in the CCC and will host Newton on Friday.

Tri-Village improved to 14-0 on the year and 7-0 in the league and will play at Twin Valley south on Friday.

Did Tri-Village coach Josh Sagester expect to be 14-0 at this point in the season?

“I don’t know that you can ever say you expect to be 14-0 … we knew we had some pieces, we’re long, athletic and still honing our skills and basketball IQ. You saw late in the game that we didn’t necessarily take care of the ball like we should. But the kids are good listeners, they’re working really hard and buying in,” Sagester stated.

“To be 14-0, well I’ve had some good teams and been fortunate to win a lot of games … but you’re not going to be perfect every night; when you win 14, 15, 16 games, it’s just not going to happen. But what you do have to do is find a way to win, and we’ve been in a couple where our kids grind it out. It wasn’t poetry but we found a way to win and that speaks volumes for our kids, considering our youth starting 3 sophomores and 2 juniors, so there’s going to be a few pains here and there,” Sagester concluded. 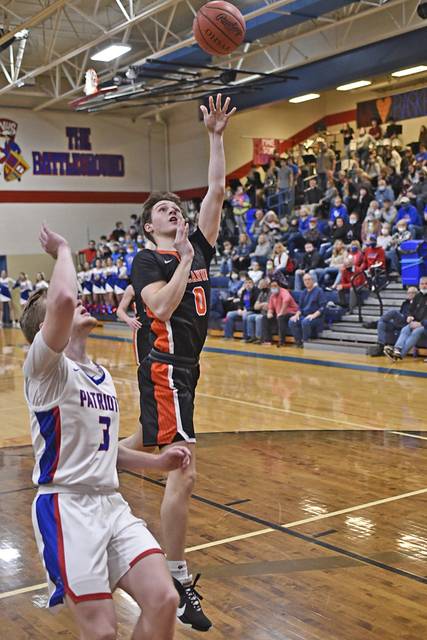