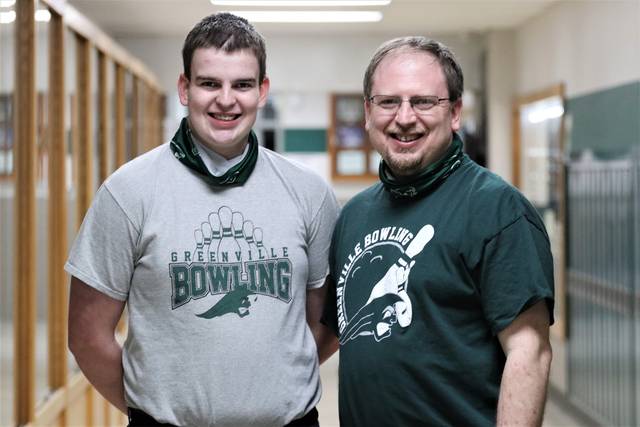 BEAVERCREEK – Justin Hadden rolled a perfect 300 game at Beavercreek’s Beaver-Vu Lanes to become the first bowler in Greenville Senior High School history to have bowled a perfect game in competition.

“There was a lot of pressure,” Hadden said. “I was shaking a lot and it was in my head – I just had to hope for the best and see if I could pull it off.”

“As soon as let go – I was a little worried because I missed my mark,” added Hadden. “I thought it was going to come in high and just leave one pin or something but I was able to get by and blow the pins up – I didn’t have any left standing.”

“Justin put it right in the pocket and pushed the pins back,” noted Coach Hadden. “He said when he was getting ready to go up he was a little nervous. At first he thought, ‘I better stop and go back and take a deep breath’ but he said nope, ‘I’m just going forward with it’ and he went down the lanes and made a great shot. It was pretty much a textbook shot for him.”

Coach Hadden put a little light on the subject of the pressure that comes throwing the final frame as well as the final ball of a perfect 300 game.

“Typically right around the 10th frame the whole alley kind of shuts down,” explained Hadden. “They let you bowl your three so it gets a lot more focused and you know it because there is nobody else bowling around you – you can feel the pressure coming on you.”

The Green Wave junior has been close before while coming up 2 pins short rolling a 298 last season.

“Justin bowled a 298 a little over a year ago so he had been in that situation before which made it a little easier this time,” Coach Hadden said. “The pressure wasn’t as intense but no matter what, once you get down to that 11th frame and you have thrown 11 strikes in a row your mind is thinking … well if I don’t execute perfectly I’m going to leave one and be stuck with a 299 instead of hitting the perfect game. It took a lot of focus but he did it.”

Justin has been bowling since he was 5 years old, was on the Green Wave JV squad his freshman year and has been with the varsity team his sophomore and junior seasons.

“It means a lot to me,” Justin said of the program’s first 300-game. “It took a lot of hard work to get to this point and it means a lot for the team and for me going forward.”