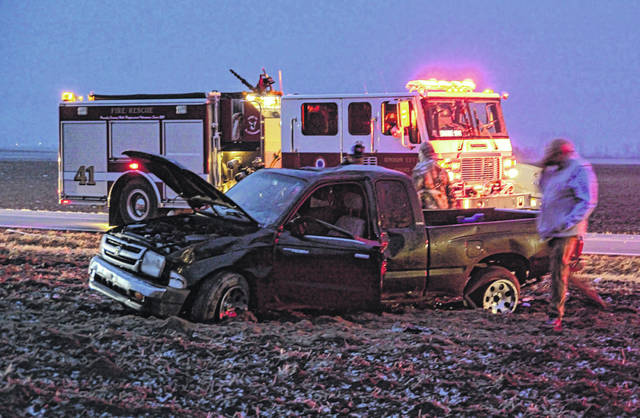 UNION CITY — Hazardous road conditions may be to blame for a Sunday evening rollover crash that has left a driver injured near Union City, Ohio.

At approximately 5:54 p.m., emergency personnel from Union City Fire and Rescue responded along with Darke County deputies to the 1000 block of Beamsville Union City Road in reference to a single-vehicle rollover crash with injury.

According to the Darke County Sheriff’s Office, a preliminary investigation into the incident revealed a green 2000 Toyota Tacoma, driven by Joshua Vigil, 19, of Union City, was traveling eastbound on Beamsville Union City Road. Vigil failed to maintain control of his vehicle on ice-covered roadways, resulting in the Toyota traveling off the right side of the roadway and rolling at least once before coming to rest in a field.

Vigil was mechanically extricated from his vehicle by Union City Fire and Rescue prior to being transported to Wayne HealthCare in Greenville for what were described as minor injuries.