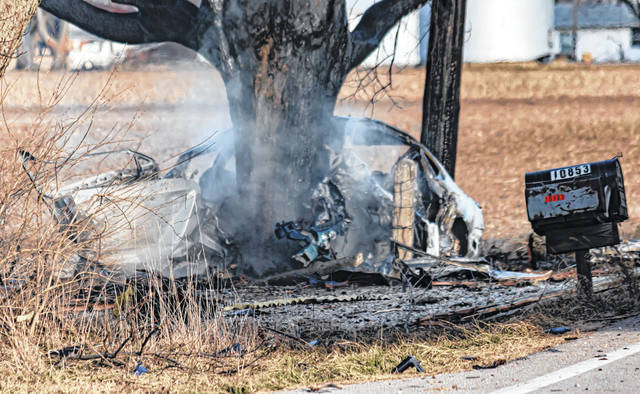 WEST MILTON — The Piqua Post of the Ohio State Highway Patrol is investigating a Saturday afternoon crash that claimed the life of a driver.

At approximately 3:35 p.m., emergency personnel from the Laura Fire Department and Union Township EMS responded along with the West Milton Police Department, Miami County Sheriff’s Office and the Ohio State Highway Patrol to the area of the 10000 block of West Frederick-Garland Road in reference to a single-vehicle crash with possible injuries.

According to the Piqua Post of the Ohio State Highway Patrol, a preliminary investigation revealed that a 2014 Chevrolet Impala was traveling westbound on West Frederick-Garland Road when, for unknown reasons, the vehicle veered off the roadway striking a telephone pole and came to rest after colliding head-on with a tree in the front lawn of a private residence located at 10583 West Frederick-Garland Road. The vehicle caught fire as a result of the crash.

The driver, whose name is being withheld until positive verification can be obtained by the Montgomery County Coroner’s Office, was pronounced dead at the scene after succumbing to injuries sustained in the crash.

This incident remains under investigation by the Ohio State Highway Patrol and the Montgomery County Coroner’s Office.