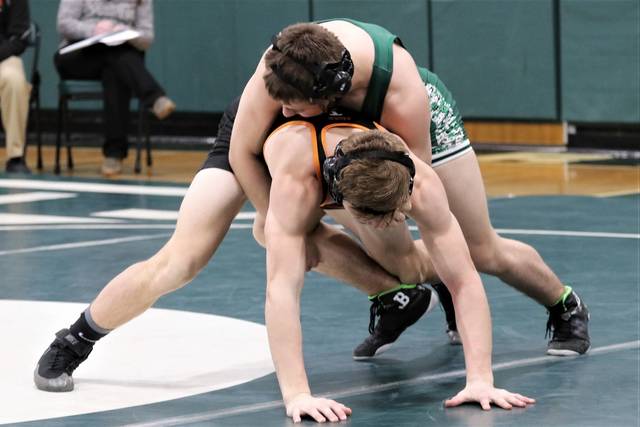 The meet did not keep team scores but did allow the wrestlers to compete in a season marred by the COVID pandemic that included a recent 10 day Greenville wrestling program shutdown due to the Coronavirus.

“It has absolutely been a rough year for us,” said Greenville wrestling coach, David Guillozet. “Ten days and that takes a lot out of the kids as far as staying in shape, but everybody else has to deal with it and so do we. We are working thru it. Hopefully it’s out of our system and the rest of the season we will stay healthy.”

“Wrestling for the Green and White it is everything to me,” McCarney said. “When I was younger I thought I was never going to compete in sports and one day it just sparked and it means so much to me. I dedicated my summers, my falls and my winters to sports – football and wrestling.”

“I didn’t get to compete tonight but just getting to watch my guys go out there and give everything they have for Drake and me and for the coaches and all the fans – it’s just one of my favorite things I have done. I am so grateful for everything this program has given me and I just want to pour back into it.”

“Cameron had a big win against the Tipp City kid,” said Beatty. “Cameron wrestled well tonight and throughout the season he has wrestled pretty well.”

Logan Thatcher stood out for the Green Wave on the night.

“Logan did a really nice job today,” said Guillozet. “He wrestled a pretty good kid from Tipp – beat him and a decent kid from Arcanum so overall he did the best for us today. He has really been coming on as of late. He wrestled really well.”

“Overall our kids wrestled hard,” Guillozet added. “I thought we could have wrestled better but overall I think they did ok.”

“Tipp City has some pretty good kids and Arcanum and Tri-County North had small teams,” Coach Guillozet concluded. “We tried to give them the best match as we could.”