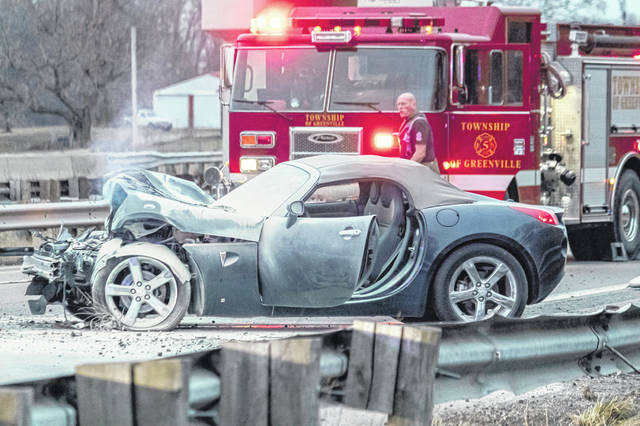 GREENVILLE — A Saturday evening crash on U.S. Route 127 outside Greenville ended in flames and the arrest of the driver for the suspicion of OVI.

At approximately 5:32 p.m., emergency personnel from Greenville Township Fire and Rescue responded along with Darke County deputies and officers from the Greenville Police Department to the area of mile marker 14 of U.S. Route 127 in reference to a possible injury crash with the vehicle fully engulfed in flames.

According to the Darke County Sheriff’s Office, a preliminary investigation revealed that a 2007 Pontiac Solstice was traveling southbound on U.S. Route 127 north of U.S. Route 36 when the driver lost control of the vehicle and struck a guardrail coming to rest in the center of the roadway. The vehicle caught fire as a result of the heavy front-end damage sustained in the collision.

The single occupant male driver, who was able to escape the vehicle without injuries before the Pontiac became fully engulfed in flames, was examined on the scene by EMS prior to refusing any further treatment and transport to a medical facility.

The driver, whose name has not been released at this time, was taken into custody for the suspicion of OVI and later cited and released by Darke County Deputies.

U.S. Route 127 remained closed for nearly an hour while the crash was investigated and crews worked to remove the burned vehicle from the scene.