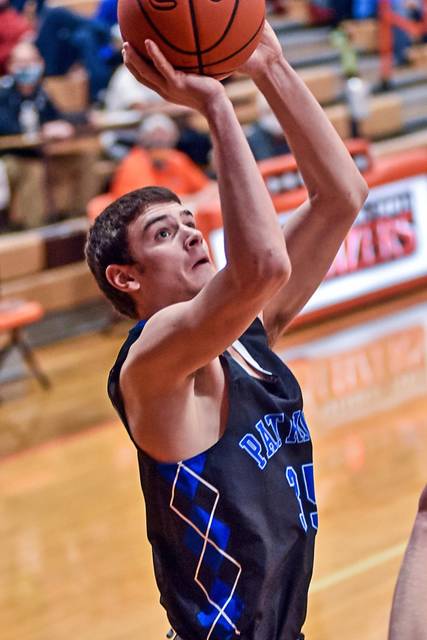 NEW MADISON – It was a great night defensively for State AP #4 ranked DIV Tri-Village who got a big night offensively from Justin Finkbine and Layne Sarver as the PATS took down the defending league champs National Trail 57-34.

It was a slow start in the beginning as Trail settled into their diamond and one defense and the Patriots methodically worked the ball around to get a good shot.

Four minutes in TV held just a 4-2 lead … but on back to back triples from Wilson Suggs and Dalton Delong the Patriots would jump ahead 10-2 at the end of the first quarter.

TV forced quick turnovers in the open court to start the 2nd frame with Sarver and Finkbine finally getting on the board and it was enough for Coach Mike Harrison from National Trail to call timeout and rethink their strategy down 16-4.

“They came out and played a diamond and one on Layne Sarver, so we gave a few of our kids an opportunity to make some shots, fortunately we made some early, not a ton … but a few to give us some separation and that’s enough to make teams have to come out of it and change their game plan,” Tri-Village coach Josh Sagester said.

That change combined with the full court defense let the horses out of the stable with Justin Finkbine scoring 12 points and Layne Sarver 11, for a total of 23 of the 24 points the Patriots put up in the 2nd quarter.

The defense continued to play solid with the exception of Wyatt House connecting on 3 triples to keep Tri-Village from blowing it wide open. TV held a 34-13 lead at the break.

The Patriots scored 14 in the third quarter and again stymied Trail giving up just 6 points as they headed into the final stanza with a 48-19 advantage.

Tri-Village went on to pick up their 19th win on the year with no losses and remains undefeated in the conference at 10-0.

Justin Finkbine led all scorers on the night with 22 and Layne Sarver added 19.

“We did a really good job of being active in our full court run and jump, and Justin Finkbine was an absolute man tonight on both ends of the court. He is a 6’5” sophomore who is really starting to come into his own right now,’ Sagester praised.

“The kids followed the game plan to a “T” across the board, no scouting report mistakes, we had very few of them tonight as they executed against two very talented kids in our league and held then to 5 and 7, I’ll take that any night,” Sagester beamed.

Next up for the Patriots is Miami East who has just one league loss, so a win on Friday will secure the league title for Tri-Village in the last year of the Cross County Conference. 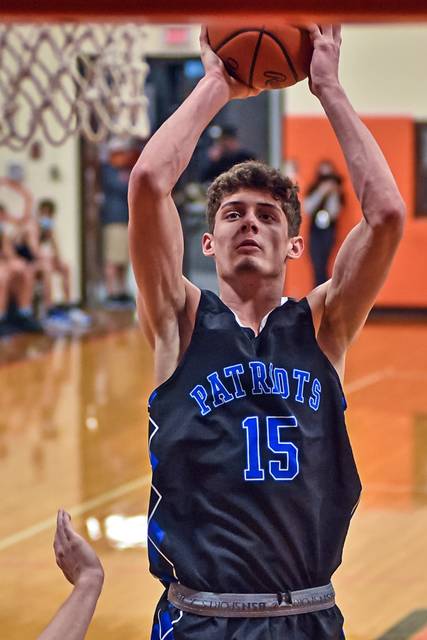