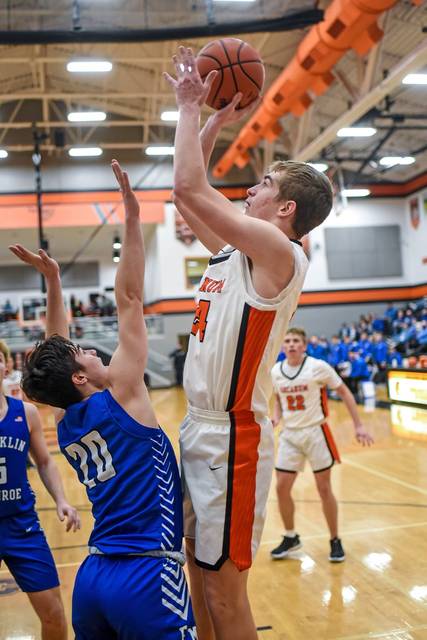 ARCANUM – The Arcanum boys basketball team played a very methodical and patient game vs their neighbor to the east St Rt 49 and built a sizable lead then fended off furious pressure by FM late to earn a 48-35 victory.

The game plan for Arcanum was one of patience and time of possession, a pace Franklin Monroe was ok with playing to start the game.

Jake Goubeaux made two triple tri’s giving Arcanum a 10-4 lead at the end of the first quarter.

If the pace of the game wasn’t slow enough, enter the 2nd quarter, as Arcanum added just 7 more points, but it was enough to give them a 17-9 lead at the break.

In the third frame the Trojans scored 13 points between 6 guys showing the balance and effectiveness of working the ball in their offense. Combine that with their stingy defense giving up just 2 points to go up 30-11 at the end of the quarter.

“Defensively we came out with a lot of intensity and executed our game plan, we took away what they wanted to do and they missed some shots as well, they took a lot of 3’s and we knew they were going to, we contested most of them and did a nice job of rebounding the shot after,” Arcanum coach Roger McEldowney said.

But given this is a backyard rivalry things were about to get interesting.

The Jets exploded for 24 points in the 4th quarter by changing the pace of the game and using a full court run and trap leading to layups and lifting the lid off the basket which was sealed tight the previous 3 quarters.

Ky Cool scored 9 of his 11 points and Aidan Luchini 8 of his 10 in the final period. Luchini hit a triple that was followed up by a Cool steal and a lay-up at the 2:38 mark cutting into the lead 40-31 giving the Jets hope and putting pressure on the Trojans to finish.

“Our kids played pretty well for 3 quarters, then we got a little sloppy in the 4th and the game got a little bit physical and the score a little closer,” McEldowney said.

That run and pressure by FM was something McEldowney was glad to see and have a chance to play through.

“Really it was good for us, we have to learn how to weather these type of storms and we ended up making some plays and got it back up to where it needed to be,” McEldowney stated.

Arcanum did that by attacking the pressure, and on back to back plays by guards Jake Goubeaux and Ian Baker they were able to dish to Nick Sharritts for easy scores as the Trojans took back control of the game prompting positive remarks from McEldowney.

“Nick Sharritts did a nice job tonight getting us some big buckets and big rebounds … but we have to work on his free throws and I told him that on the bench, free throws on Monday, and he said yea I got it coach.”

From there it was a matter of making free throws, which up to that point in the game was a little shaky. Arcanum shot just 9-for-22 in the game … but went 8-for-12 late to preserve the win.

“We had the right people at the line at the end of the game. Ian Baker and Jacob Goubeaux both have done a great job of knocking down free throws for us all year. They handle the ball a lot for us and that’s good in late game situations, knowing they are going to go to the line and make them,” McEldowney praised.

Arcanum went on to win the game 48-35 and was led on the night in scoring by Jake Goubeaux with 13 points with Ian Baker and Nick Sharritts each adding 11 points as well.

With the win Arcanum improves to 13-6 overall and 9-2 in the Cross Country Conference.

“This was a big win for us tonight, our kids were excited and they wanted to win this one pretty bad. I give Franklin Monroe credit they didn’t quit after being down 30-11. They just kept coming, and coach does a good job over there, their kids got after it in the 4th quarter, they didn’t want it to end being down 20, they got it close, so I give them a lot of credit, but also a lot of credit goes to our kids for playing tough at the end and I’m proud of them for that,” 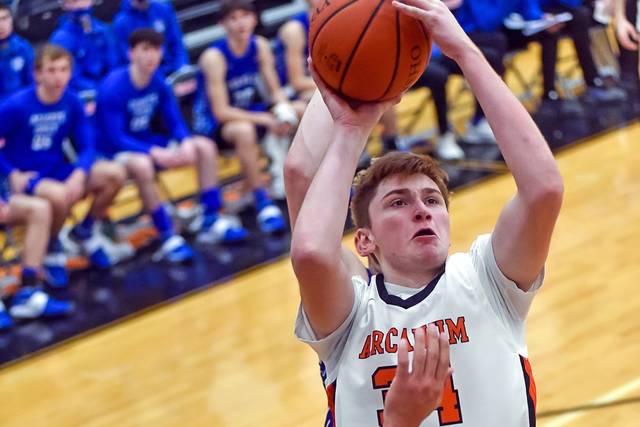 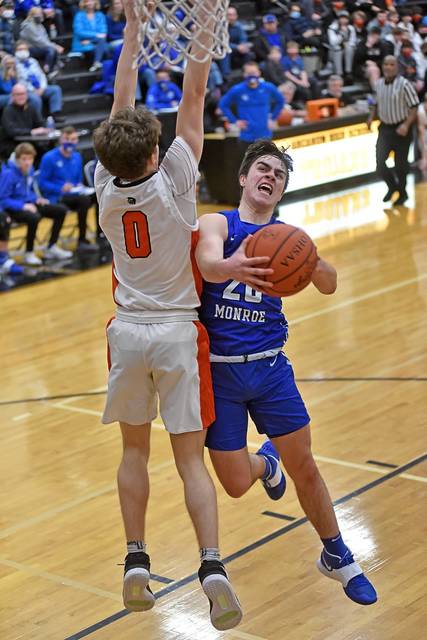 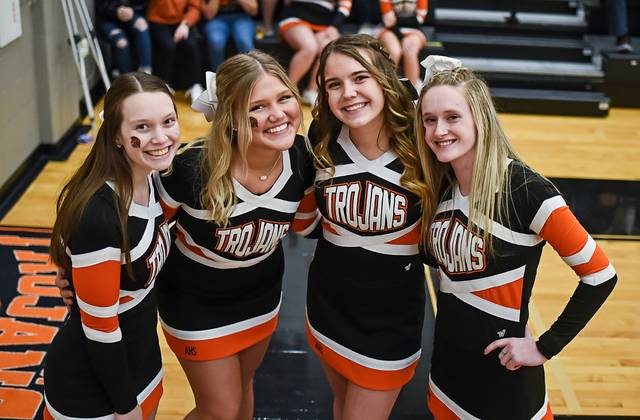 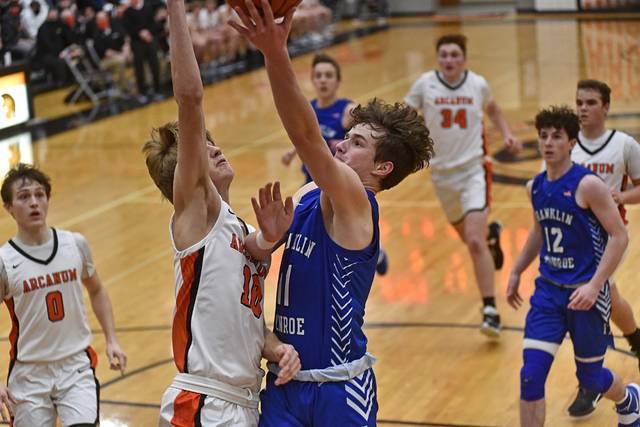 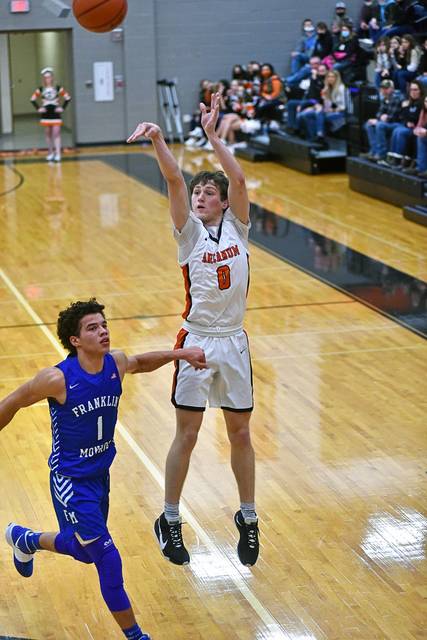