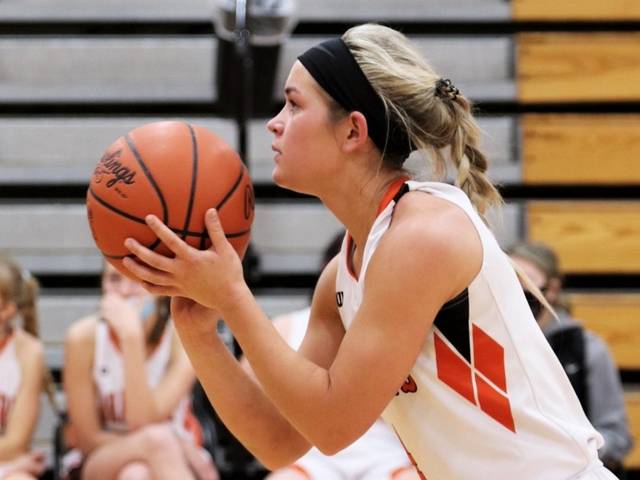 BRADFORD – The Bradford Lady Railroaders defeated the Sidney Lehman Catholic Lady Cavaliers by a 42-33 score in non-conference play to close regular season play with a 17-5 tying the program for the most regular season wins.

“It’s ironic that that class four years ago was celebrating a 19-0 eighth grade season and when it’s all said and done, we have two survivors that stayed committed to the program all that time,” said Besecker. “It says something about them. They have meant a lot to the program. We have had a lot of success and those two are a big part of it. We finish at 17-5 and that ties for the most wins in a regular season. Hopefully we can keep rolling into the tournament and chalk up a few more.”

The Lady Railroaders took the opening period 11-7 with Austy Miller hitting for 7 points including a 3-pointer and Rylee Canan and Remi Harleman each adding a basket.

The teams played to a 10-10 second quarter standoff sending the squads to the break with Bradford holding a slim 21-17 advantage. Miller and Harleman each connected for 4 points and Isabella Hamilton went 2-2 at the line.

Bradford pushed its lead to 24-18 at 4:39 in the fourth before Lehman battle back made it a 3-point game after three periods of play taking advantage of Emma Canan and Austy Miller picking up their fourth fouls of the game and going to the bench.

Lehman took the third quarter 8-7 and trailed 28-25 with one period to play. Miller went 5-6 at the line and Harleman hit a basket in the paint for the Lady Roaders in the third.

Sidney took advantage of Miller and Canan riding the bench to open fourth quarter play and quickly grabbed a 29-28 lead with 5:49 on the fourth quarter clock. Coach Besecker went to his bench bringing Canan and Miller back into the game resulting in nine unanswered Lady Railroaders points to give the home team a 37-29 advantage with 1:07 on the game clock.

“I really don’t say anything to them other than we need you back in the game – keep your hands to yourselves,” Coach Besecker said of comments to Miller and Canan. “They are veteran players and they know what they need to do.”

Miller was a perfect 8-8 down the stretch at the fourth quarter free throw line and Emma Canan and Cassi Mead each added 3 fourth quarter points to pull out the win over the Lady Cavaliers.

“When we got them back in the game with both of them having four fouls, Emma immediately made several big plays at the defensive end,” Besecker said of Emma Canan and Austy Miller. “That was huge and got us some momentum back.”

“Austy’s been pretty good from the free throw line all year,” Coach Besecker continued. it’s nice to have that weapon there when the game is on the line and you need somebody to knock down free throws.”

Miller led Bradford and all scorers with a game high 24 points including 15-17 at the charity stripe. 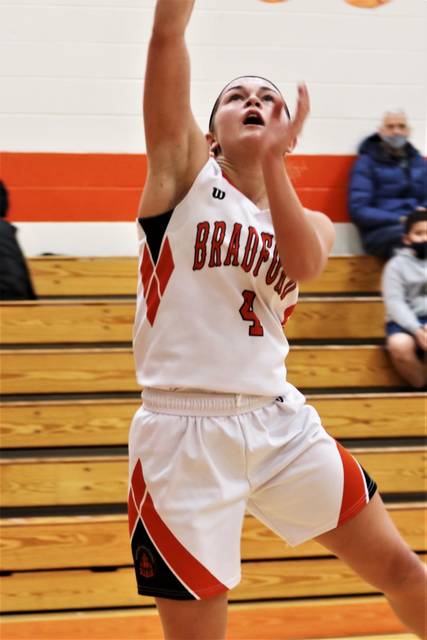 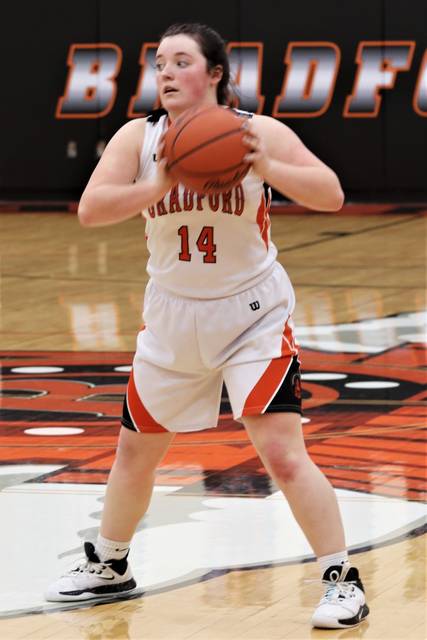 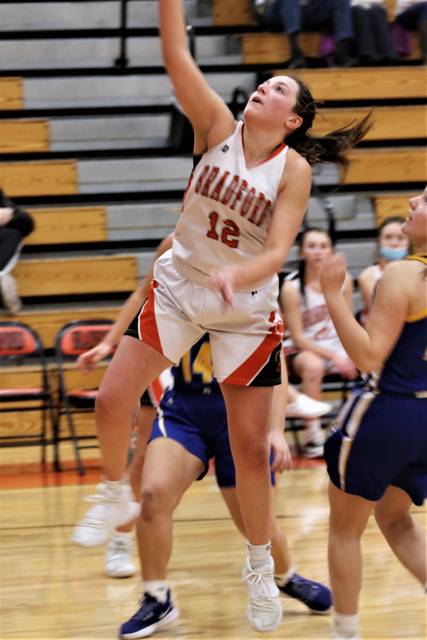 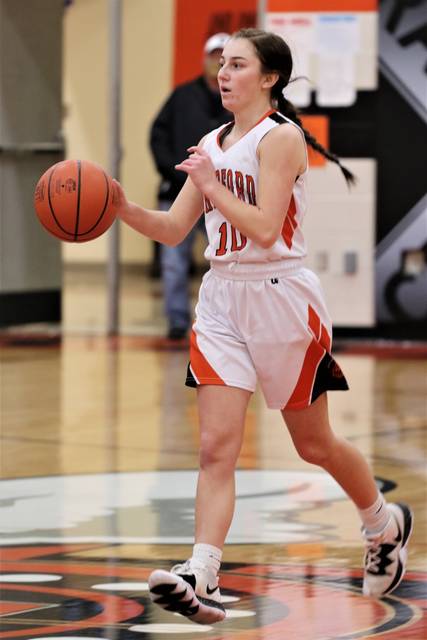 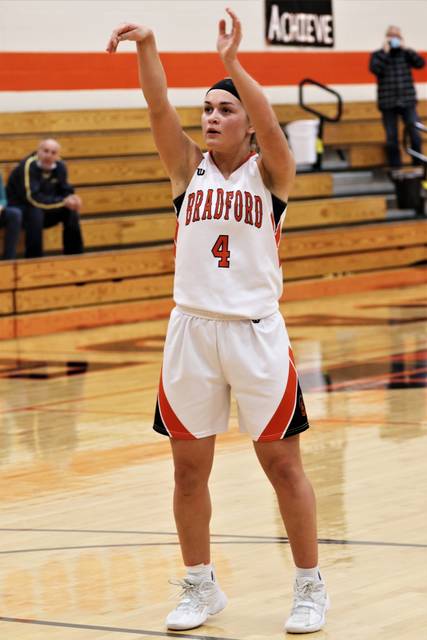 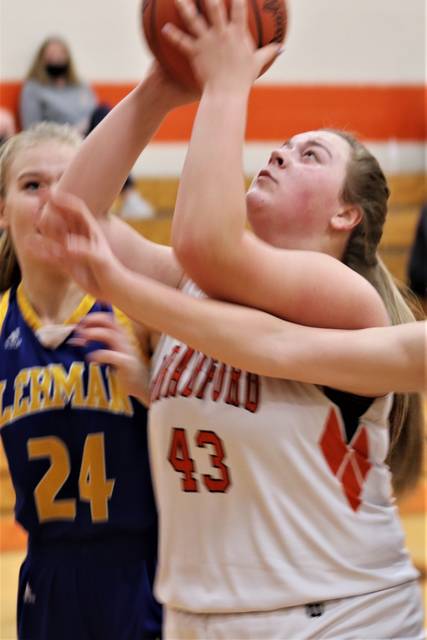 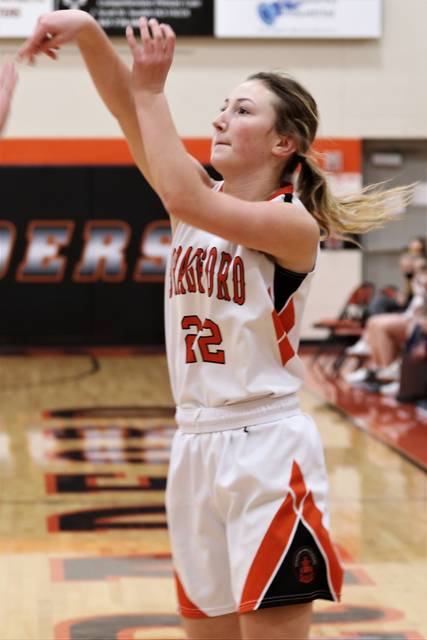 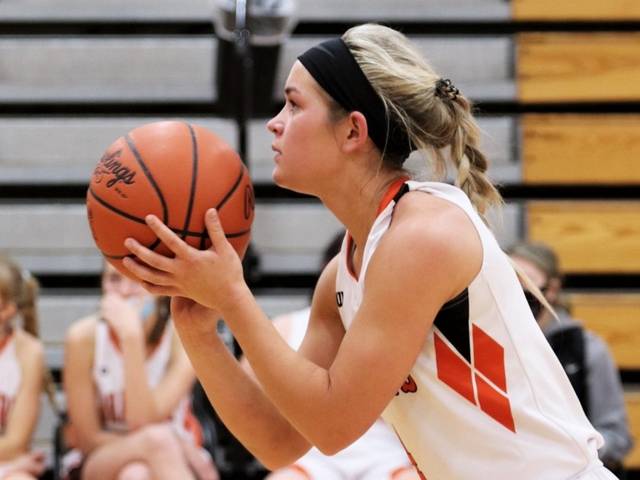