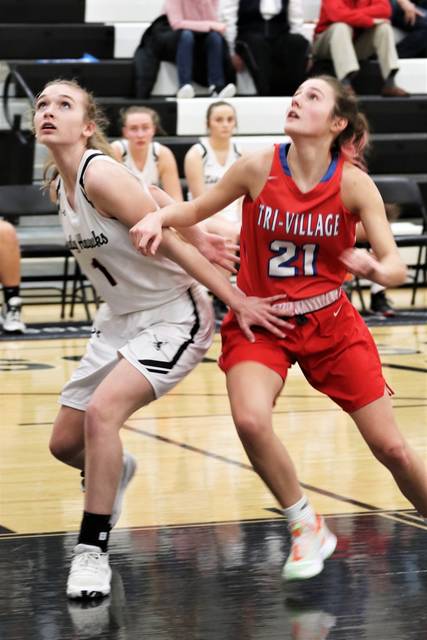 “We talk about this a lot,” Tri-Village coach Brad Gray said of his team peaking at the right time. “It is different this year because we didn’t play our 35 games in the summer that we would normally play. I went into the year concerned about that and we started off slow.”

“It was a struggle through the month of December and then late December we really started to find ourselves a little bit. Now we are playing better basketball right now than we have in some years past and maybe it’s because we hadn’t played so much in the summer and maybe it’s because our volleyball kids had a long volleyball run and weren’t with us the first two weeks of practice and basketball still feels good to them, still feels fresh to them.

“Ware hoping that we are going to keep peaking at the right time and play our best basketball in March hopefully,” Gray added.

A combination of a Tri-Village slow start and a good Mississinawa Valley start to the game had the Lady Patriots with a 2-point 6-4 lead with just 2:54 remaining in first period play.

The Lady Patriots took advantage of a 17-0 run to close out first quarter action and lead 23-4 after one period of play. Rylee Sagester canned two 3-pointers and went 2-2 at the charity stripe to lead Tri-Village with 8 first quarter points. Delanee Gray drilled two treys good for 6 points, Morgan Hunt hit a bucket and went 2-2 at the line, Meghan Downing dropped in a basket and hit a free throw and Molly Scantland rounded out first quarter TV scoring with a basket.

Period No. 2 showcased the state ranked Lady Patriots as the New Madison girls took the period by a 24-1 score. Adding to the team’s 17-0 run to close out first quarter play added up to a 46-1 run over the final 10:54 of the first half.

Period No. 3 saw Coach Gray pull the full-court Lady Patriots press and run a slower paced offense with Tri-Village taking the period 16-6 sending the teams to the final period of play with the visitors holding a 63-11 lead.

“This isn’t the first game that that has happened,” Coach Gray said of the team’s lopsided scoring. “There are a couple of things you have to take into consideration in games like this. No. 1 we need to respect our opponent, these are still teenage kids and we need to make sure that it is education-based athletics. We want to do things the right way but the other thing is and I say this to my team all the time – and I say this to people that ask me how you manage games like this.”

“My No. 1 priority is always going to be my team and we have to make sure that we’re doing what we have to do to make sure we are preparing our team not just to beat Mississinawa Valley but to make the run that we hope that we can make in the playoffs,” added Gray. “We can’t do that if we are only playing two quarters every night.”

“I know people will question why are you keeping starters in the second half in a game like that,” said Coach Gray. “My loyalty has to be with my team and making sure we are doing the things that we have to do to keep ourselves prepared because when you get to the playoffs you have to play four quarters. You can’t play two or two and a half quarters. That is how we try to manage, but I never want to go into a game and try to show a team up.”

Sagester and Hunt led Tri-Village and all scorers with 11 points each with 11 Lady Patriots notching points in the scoring column.

The TV Lady Patriots improve to 18-2 overall and finish the regular season as Cross County Conference Champions with a perfect 12-0 record. 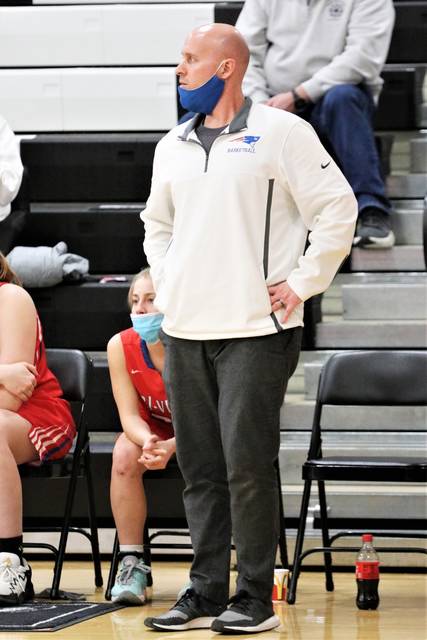 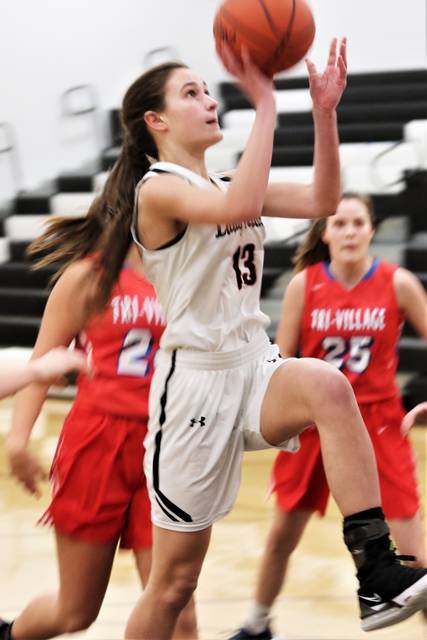 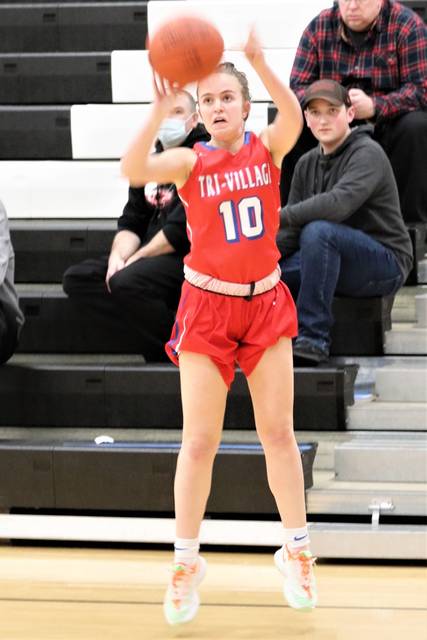 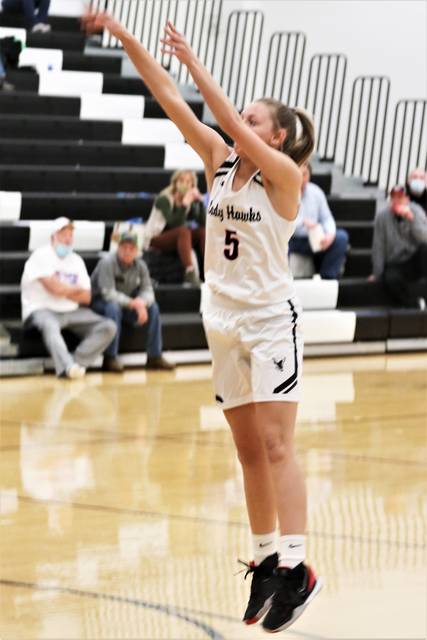 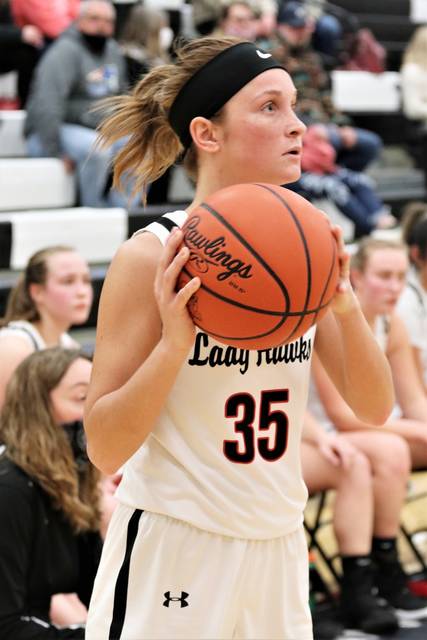 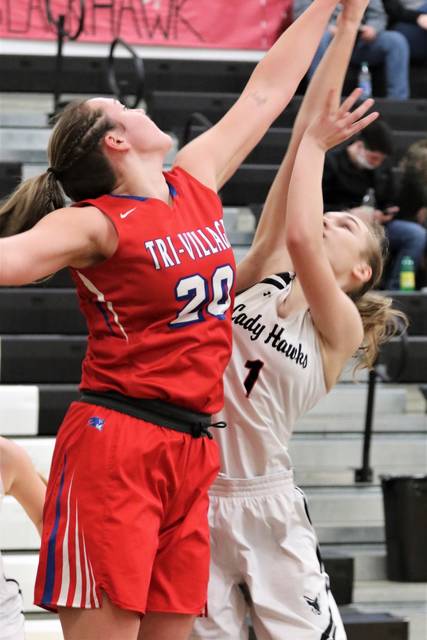 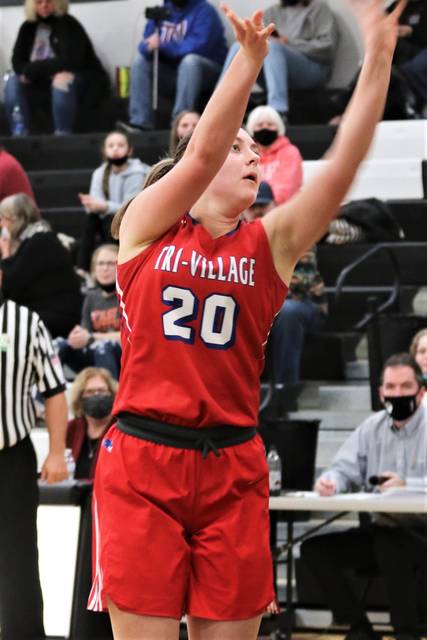 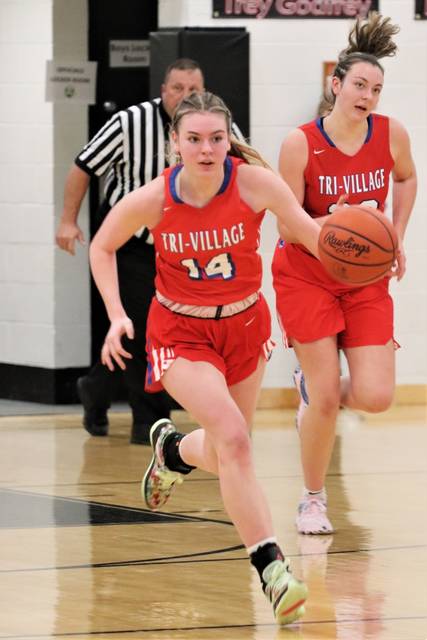 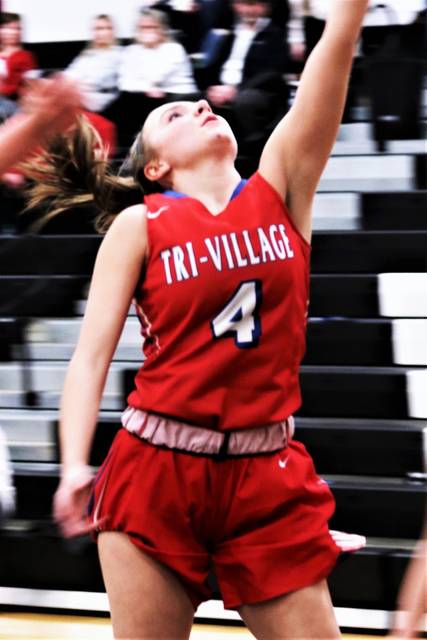