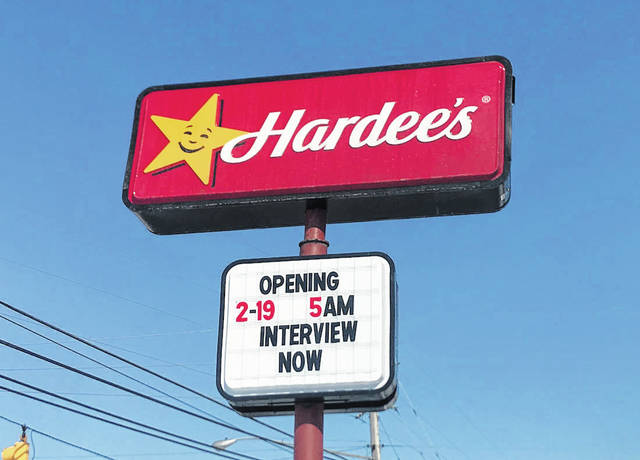 GREENVILLE — Hardee’s is now open in Greenville at the new location of 699 Wagner Avenue. The restaurant officially opened at 5 a.m. on Friday, Feb. 19. With this opening, Hardee’s brings an array of classic American cuisine back to Greenville after the previous Hardee’s, located on Sweitzer Street, closed in the mid-1990s.

The process of getting a Hardee’s to Greenville, as mentioned in previous articles, was a three-year long project that raised a number of issues concerning the choice of location at the corner of Wagner and Russ. With Wagner and Russ being arguably the busiest intersection in Darke County, Greenville Mayor Steve Willman and the Greenville Planning and Zoning Committee carefully examined whether traffic would become too congested with the addition of a new building.

Ultimately, the city decided that traffic would not be a major issue and began making plans to move ahead with the project. The construction crew broke ground in September 2020 and the turnaround time was incredibly quick. It is yet to be seen how much of an impact the restaurant will have on traffic in the area, but Willman previously assured that the city is watching the area closely.

The ownership group responsible for bringing a Hardee’s to Greenville was overjoyed at the initial turnout on Friday. Customers lined up to get their first bites as early as 5 a.m, and continued lining up until the restaurant closed at 10 p.m.

“We just couldn’t be happier to have a store in Greenville,” said Diana Jett, District Manager at Hardee’s. “The turnout today was nothing short of amazing and we look forward to continue serving the Greenville community.”

Hardee’s, now located at 699 Wagner Avenue, is open from 5 a.m. to 10 p.m. seven days a week and serves breakfast from opening time until 10:30 a.m. The lunch menu features a number of different beef and poultry options. For more information or to look at the menu, visit hardees.com