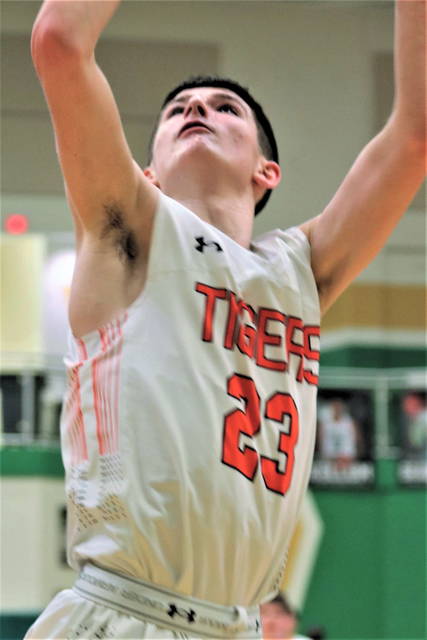 CLAYTON – The Versailles Tigers advanced in OHSAA DIII tournament play with a 66-56 win over the Preble Shawnee Arrows.

“Our kids are excited to be moving on,” said Versailles coach, Travis Swank. “We really never gave up on ourselves at all throughout the year – definitely wasn’t a successful season like we expected it to be. We had a lot of adversity early in the year, a lot of inexperience at the varsity level. Those kids never gave up on themselves, their teammates, the coaches and that is huge. Our kids want to play into March and that is what we are going to do.”

Behind the first period scoring of Versailles junior Jaydon Litten, the Tigers jumped out to a 17-12 lead over Preble Shawnee with Litten knocking down three 3-pointers while going 2-2 at the charity stripe to lead the Tigers with 11 points in the opening quarter.

Versailles took period No. 2 by a 15-13 score with Litten burying his fourth triple of the night, hitting his first 2-point basket of the game and making 1-1 at the line sending the teams to the break with the Tigers leading 32-25.

“We tried to man them up early on and got in foul trouble a little bit early,” said Swank. “We went to our 2-3 zone and that seemed to bother them for a good while. That’s where we made a little bit of a run in the first half.”

The Tigers pushed its lead to 47-35 at 1:25 in the third with the teams closing out third quarter play with Versailles 1-point better outscoring the Arrows 17-16 to lead 49-41 with one period to play.

Versailles got balanced third quarter scoring with five players making the scorebook led by sophomore Connor Stonebraker’s 5 points including a 3-pointer, 4 points each from Jared DeMange and Jaydon Litten and 2 points apiece from Eli and Noah McEldowney.

Period No. 4 saw Preble Shawnee make it a 4 point game with 4:58 showing before Versailles stepped up play at both ends of the court with Stonebraker making his defensive presence known and Jaydon Litten nailing his fifth triple of the night while going 5-6 at the line giving the Tigers a 10 point victory punching its ticket to the district championship game.

“We threw zone-man and the box-and-one in the second half on Shrout so we kind of threw everything at them,” Swank stated. “Luckily we came out of here with a 10 point win.”

“Connor (Stonebraker) got some key rebounds in the second half,” continued Coach Swank. “He frustrated them for a good stretch there in the second half with his size and his athleticism. They were taking away a lot of things in the middle and they were really keying on Connor to take away his presence inside the post but we had other guys step up and were able to get to the basket as well. This is a team game and this was definitely a team win here tonight.”

“Very good skill out there on the floor tonight,” noted Coach Swank. “The Shrout kid and the Singleton kid – they are loads and that is why they have had such a successful year. They do a lot of good things offensively but we have some kids that can put the ball into the basket ourselves.”

“Jaydon (Litten) had a really great night here tonight – shot extremely well and then we had three other guys hovering around double figures,” Swank added. “We talked about that all year. We need three guys around double digits every single night to compete. I was told that from Scott McEldowney a long time ago…you have three guys in double figures there is a good chance you are going to win and we were right around that mark tonight.”

Coach Swank talked about his team advancing to the District Championship game while sporting a subpar 10-14 season record.

“Our schedule is probably one of the hardest for our division,” Swank said following the team’s win. “We are not scared to go play anybody but the whole problem with this year, we have one varsity retuning and really Eli (McEldowney) didn’t see a lot of minutes last year as well so really this is his first full year.”

“Everybody out there is learning on the fly and you cannot teach experience, you just got to go out there and earn it on the court,” continued McEldowney. “These guys really earned it this year through trials and tribulations throughout the whole year. It hasn’t been easy but I think that is what has gotten us to this point, having those failures early on and staying together has led us to the success now that we are obtaining here at the end of the season.” 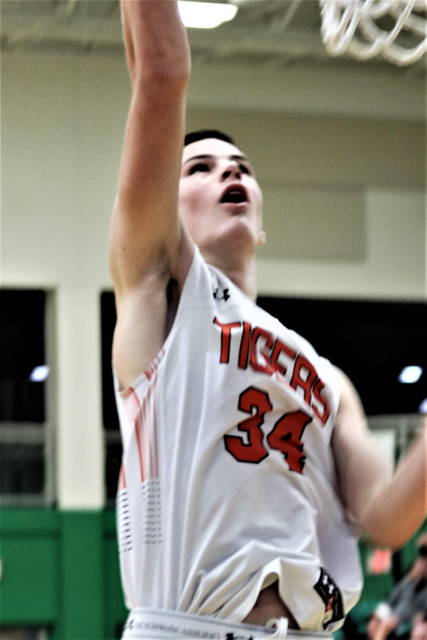 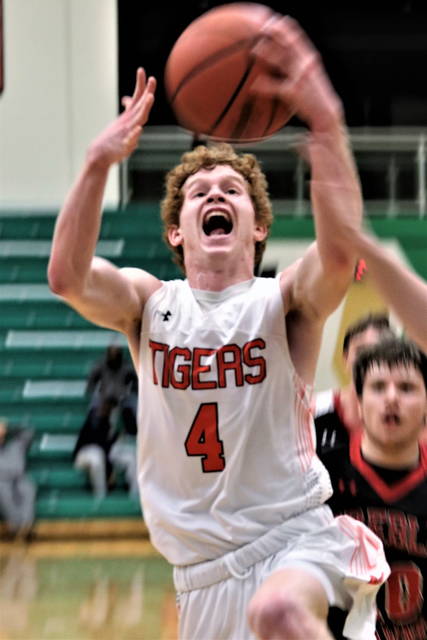 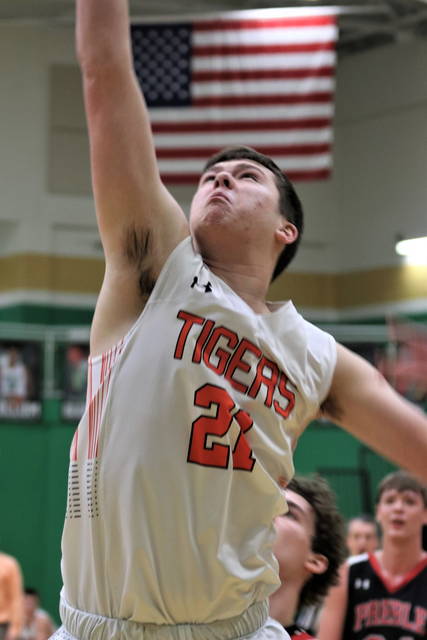 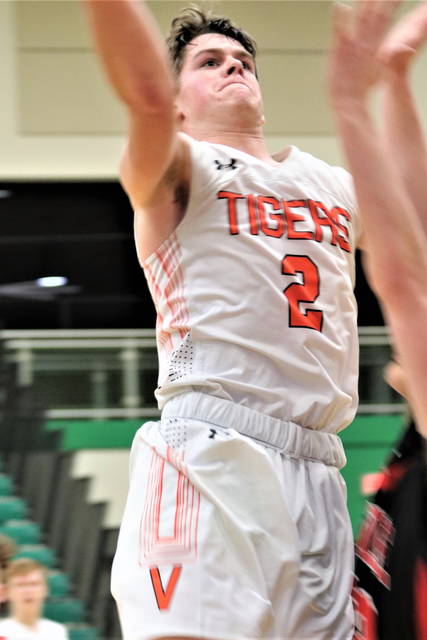 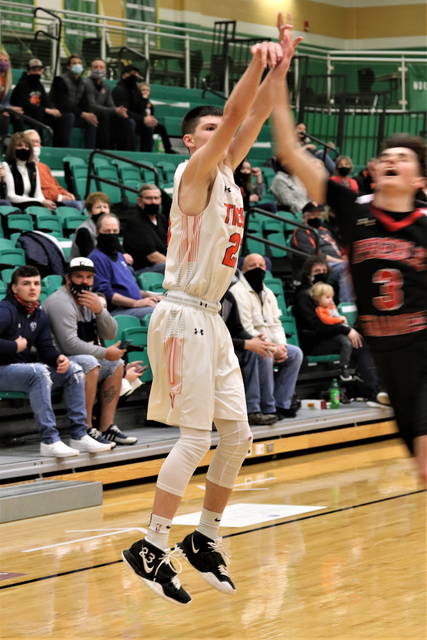 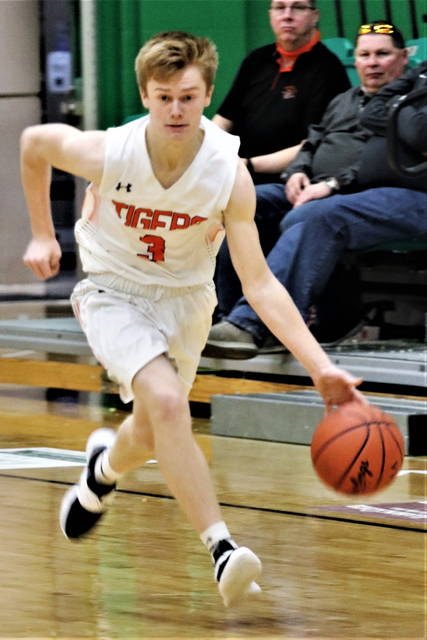 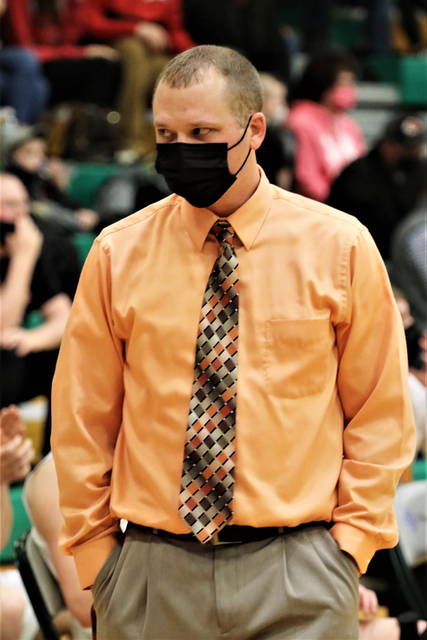 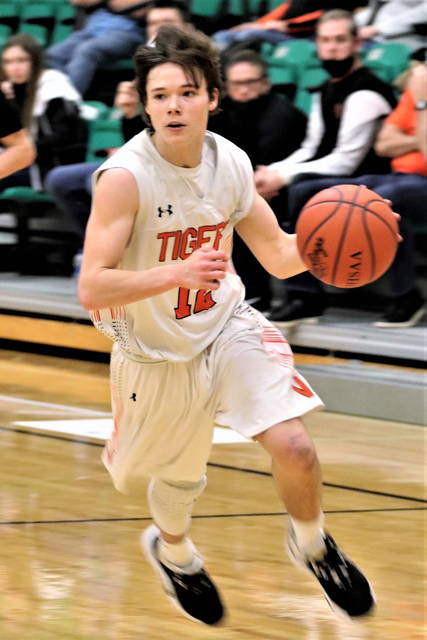