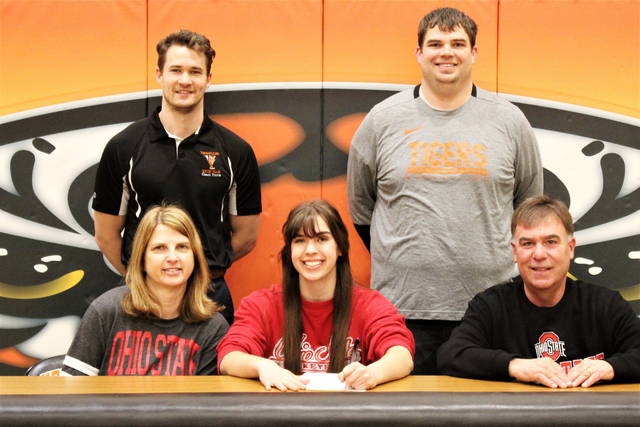 VERSAILLES – Versailles senior, Lauren Monnin, the daughter of Stefanie and Terry Monnin signed with The Ohio State University Women’s rowing program while continuing her education in Poly-Si or International Relations.

The OSU rowing coach reached out to Versailles swimming coach, Mark Travis inquiring if he had any athletes interested in rowing for The Buckeyes.

“I happened to be interested in rowing so we got in contact with the coach,” said Monnin. “I talked to her and told her about myself and I just signed.”

“We are excited to have Lauren go off to OSU to be on the row team,” said Coach Travis. “Seeing her strength on the swim team I figured she would be a good fit for a row program in college.”

The four year Lady Tigers’ swimmer has no rowing experience but will use her high school swimming conditioning and abilities to take her to the college level of sports.

“I have never rowed before but they get athletes – a lot from swimming because swimming transfers really well just with the conditioning and the muscles and all that,” Monnin stated, “so they normally recruit swimmers for rowing.”

Monnin originally had no plan for a “signing” but chose to do so with the encouragement of OSU’s coach to help promote college rowing at Versailles.

“She said since it’s so uncommon especially around small towns, I thought I would do that so maybe other students at Versailles would see that rowing exists,” Monnin stated. “Even if you don’t do rowing you can still get the same opportunity to go to a big school and participate in sports beyond high school.”

The Versailles senior had been looking at OSU as a possible college to attend before rowing came on the scene.

“I applied there before I got into the rowing situation so it was just perfect how it lined up,” Monnin noted. “It was one of my top schools and then getting to do a sport there as well was just kind of the icing on top the cake.”

“Lauren has been swimming the last four years of high school,” Coach Travis concluded. “She came in with very little experience but grew a ton as an athlete for four years. She is college ready to be an athlete in college.”