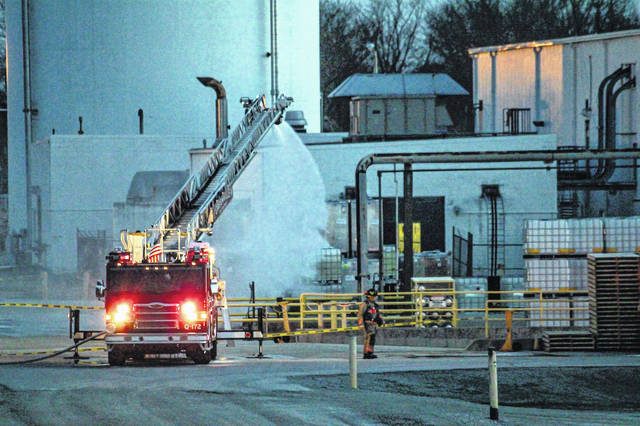 GREENVILLE — An industrial incident involving the overheating of two chemical totes at BASF of Greenville prompted the response of both the Greenville Fire Department and BASF’s own Emergency Response Team.

A release prepared by BASF stated that, “…technicians at the BASF site in Greenville, OH determined two totes of butyl acrylate were at an elevated temperature. After monitoring the totes, BASF’s in-house emergency response team requested assistance from the Greenville Fire Department… emergency responders remained on site until the temperatures in the totes stabilized and contained the material within the totes.”

Firefighters from the Greenville Fire Department, with the use of two aerial ladder trucks, immediately began to apply water to the totes in question in an attempt to lower the temperatures of the chemicals stored within. Firefighters also determined for safety reasons, due to the nature of the chemical and high winds at the time of the incident, to close off and block all traffic on US Route 127 and US Route 36 East surrounding the immediate area. Officers from the Greenville Police Department, Darke County Sheriff’s Deputies, the Ohio State Highway Patrol and the Ohio State DOT blocked traffic for nearly a mile in all directions. Traffic remained closed for two hours while air quality testing was performed to ensure the safety of those within the vicinity of the incident as well as passing motorists.

“To the best of our knowledge the safety valves on the totes released once the pressure in the totes reached its maximum levels. Vapor from the totes then began to escape until the temperatures within could be lowered,” said Greenville City Fire Chief Russ Thompson. “I don’t believe there were any concerns of chemical runoff from the totes. The plant operates with a state-of-the-art Dyke System that collects any runoff from chemicals and stores that runoff in a detention pond on site. That is then tested and retested to determine any safety concerns.”

Firefighters remained on the scene for nearly 10 hours until 9 a.m. Precautions were taken to ensure the stability of the chemicals stored within the two compromised totes.

According to Bob Nelson, Head of Site Communications and Community Relations at BASF, “Safety is a core value at BASF. There were no injuries or offsite environmental impacts as a result of the incident.” Mr. Nelson also added that, “BASF appreciates the Greenville Fire Department’s timely response and expert support to safely contain the situation.”

The incident will remain under investigation by the BASF Corp. and the Greenville Fire Department.