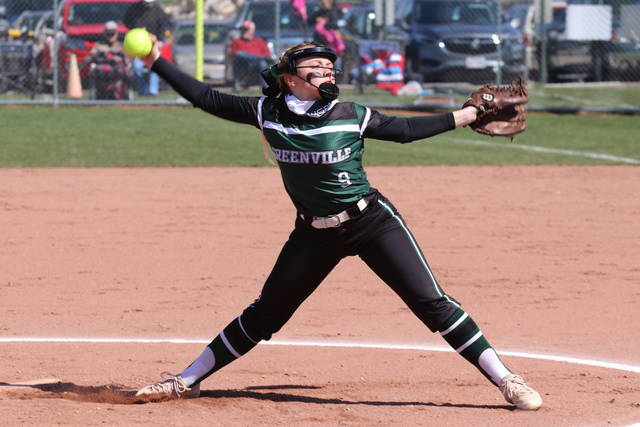 GREENVILLE – The Lady Wave dropped its first game of the season falling to the GWOC’s undefeated Beavercreek Lady Beavers by a 2-0 score with two of the state’s perennial powerhouse softball programs; Beavercreek and Mechanicsburg in town.

“Just a fun day here at the park – three great programs going at it,” said Greenville coach, Jerrod Newland. “First game Beavercreek lined up and beat us and when we give up two runs – if you would have told me Beavercreek would score two, I would have thought we would be in pretty good shape.”

Grace Shaffer pitched seven strong innings for the Lady Wave allowing one-earned run on 7-hits while striking out eight and allowing no walks.

“Grace threw a whale of a game,” Newland said. “Grace pitched very well. If you told me before the game Grace would strike out nine and they would score two runs – I would have really liked our chance. Unfortunately we did not take advantage of two opportunities and a couple bang-gang plays.”

Greenville hitters struck out just five times but it was a game that saw the Lady Wave hitting directly to the visiting fielders including two hard hit one-out line drives with runners in scoring position ending in double plays to keep Greenville scoreless against the OHSAA DI Lady Beavers team.

“Those two line drives there with two runners in scoring position twice, and the next one the best hitter is coming up and the other double play the other best hitter on the team is coming up,” Newland stated. “They would have been neat opportunities coming for the kids and you can’t hypothetical but bottom line, three or four things didn’t hop our way and good teams make good things hop their way and this morning Lady Wave Softball didn’t do that. Hats off to Beavercreek because they moved to 6-0.”

Saige Fellers, Susie Blocher, and Kenna Jenkinson each collected a hit to lead the Lady Wave at the plate.

“You have to put it on every day,” said Newland. “Everybody always looks at stats and reads records but bottom line is; its softball. The ball doesn’t know who’s going to win and you lineup and play. An object is thrown out there and a force of a bat is thrown on and somebody has to pick it up, catch it and play it – they don’t know who hits it or the ball is supposed to do what and today Beavercreek made some plays and that is what good programs do – come out and play and have some fun with it and today we were on the short end of the stick in the first one.”