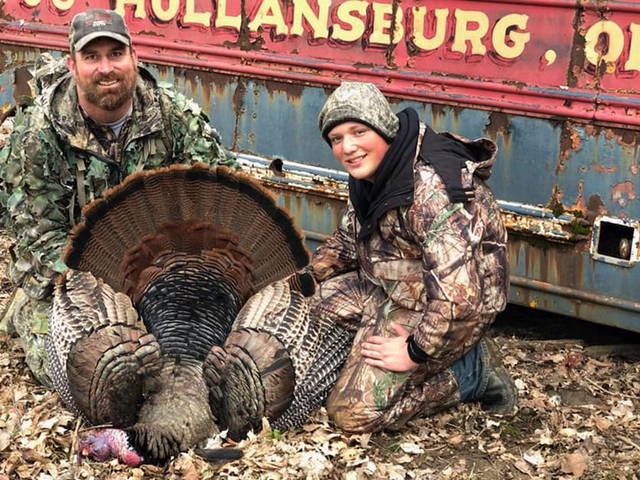 GREENVILLE, Ohio…The Light Foundation, a nonprofit founded in 2001 by three-time Super Bowl Champion and New England Patriot Matt Light and his wife Susie, is gearing up for its 12thannual Youth Wild Turkey Hunt, scheduled to kick off on Friday, April 16th, and wrap up on Sunday, April 18th, 2021. The actual hunt will take place on Saturday and Sunday, on the grounds of the Foundation’s Greenville-based500-plus acre facility, Chenoweth Trails, as well as on land all over Darke County cleared for access by local landowners. A kick-off dinner, safety training and orientation for all participating youth hunters will take place at Chenoweth Trails at 5:00PM on April 16th.

“If these kids knew how many hours everyone spent on their behalf they’d be blown away,” saysLight.During the year,the Light Foundation’s Chenoweth Trails facility hosts nearly 8,000 people. The Foundation has 5 full-time employeesand 6 part-time employees on the payroll. The rest are volunteers. Almost three dozen of them assist with the annual youth hunt as guides, spotters, cooks, and camp helpers to help make this event a success year after year. “It tells you the job of the turkey hunt team that we’ve got.The work they are doing is really life changing. Some of these kids who have been on the turkey hunt have asked to come back and mentor the incoming youth after they havegraduated. To me, that speaks volumes,”adds Light.

The Light Foundation called on area youth, who enjoy the outdoors, are interested in exploring wildlife habitats, and want to support conservation efforts to take part in the 2021Youth Wild Turkey Hunt. The team recentlyreached out to the local community and Darke County area schools through a public service announcement campaign – asking for those interested in participating to fill out an application andsubmit a writing assignment on the following topic:“What is a healthy self-image, and why is it important?” Participants will have to present a valid 2021Ohio hunting license during registration, and first timers also need to pass a Hunter Safety Course or comply with an apprentice. This year’s hunters are, Brock Durst, Lance Greer, Connor Hardy,Cali Harter, Libby Harter, Caleb Hartman, Ethan Hartman,Landon Helman, Trevar Martin, Michael Menke, Graham Milligan, Colin Moody, Deanna Moody, Wyatt Rammel, Carrie Rhoades, and Andrew Winner.

“These kids will haveso much funhunting andlearning techniques to practice the sport safely. They’ll also have a chance to get even more involved in the community by volunteering at our Foundation’s Chenoweth Trails facility,” notes Program Director April Brubaker. “We’ve been doing this now for over a decade, and it’s always a great time. We honestly get just as much out of it as these young men and women do!”