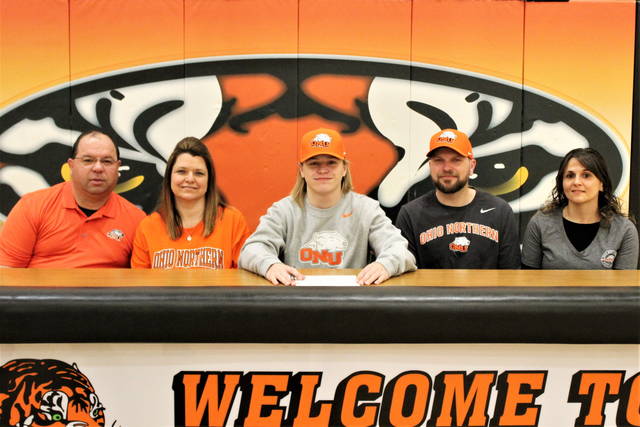 “This came about in late March and I reached out to Coach Buckley and Coach Loyd out there at ONU,” said Frazee. “They liked what they saw in me and brought me out for a visit. It was one visit and done for me. I fell in love with the campus immediately and the student life there. The football facilities were absolutely amazing.”

“I’m really looking forward to spending the next four to five years there,” added Frazee. “I can’t wait to make the most of my opportunities. I will be pursing my position at quarterback while I’m there.”

Fazee, the son of Crystal Buteau and Zach Frazee plans to dual-enroll in Sports Management and Marketing with a minor in Social Media.

“Noah always put forth a great effort, did everything he had to do and did things the right way,” said Versailles coach Ryan Jones. “As a high school coach it’s great to see any of your players move on to the next level and have that desire to play.”

“It’s a big commitment and it takes a lot to be a student athlete at that level so it takes a love of the game and a commitment,” Jones added. “Ohio Northern is a great school a great program and has a good tradition at the Division III level. I hope things work out there well for him.”

Frazee took time to thank those that helped him reach his goal of playing football at the college level.

“I want to thank Coach Jones and the rest of the coaching staff here at Versailles for allowing me to become a part of their team this year,” stated Frazee. “Definitely an experience I’ll never forget. Once a Tiger, always a Tiger.”

“I also want to thank Coach Shaffer and Coach Schmitz over in Greenville for grooming me into the man and football player I am today,” Frazee concluded. “Last but not least, Go Polar Bears.”