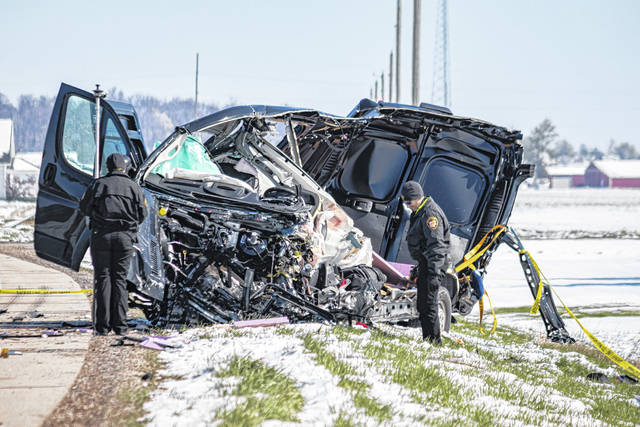 At approximately 8:40 a.m., emergency personnel from Ansonia Fire and Rescue responded along with Versailles Fire, Rossburg Fire, Darke County deputies, Darke County Coroner’s Office, and the Ohio State Highway Patrol to the area of U.S. 127 and Brown Road in reference to a serious injury crash involving a vehicle versus semi-tractor and trailer.

According to the Darke County Sheriff’s Office, a preliminary investigation into the incident has revealed that a black Dodge Ram 2500 cargo van was traveling north on U.S. 127 when, for unknown reasons, crossed left of center and collided head-on with a southbound white Volvo Semi-tractor and trailer. The semi-tractor and trailer veered off the right side of the roadway into the front lawn of a private residence, located at at the 10000 block of U.S. 127, before coming to rest after striking a tree head-on just feet from the home.

The single-occupant driver of the Dodge Ram cargo van, whose identity has been withheld pending notification, was ejected from his vehicle as a result of the collision and pronounced dead at the scene after succumbing to his injuries. The driver of the Volvo semi-tractor and trailer was examined on the scene for minor injuries by Ansonia Rescue prior to refusing any further treatment and transport to a medical facility.

This incident remains under investigation by the Darke County Sheriff’s Office. Further details of the incident will be released as they become available.