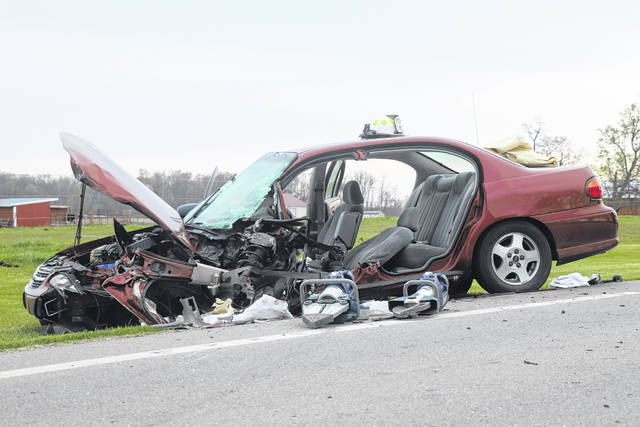 LIBERTY TWP — A driver was airlifted Friday morning following an injury crash in which a car collided with a semi-tractor and trailer.

At approximately 7:50 a.m., emergency personnel from the Liberty Township Fire Department and Tri Village Rescue responded along with Deputies from the Darke County Sheriff’s Office and MedFlight to the 2500 block of U.S. Route 36 in reference to a vehicle-semi injury crash with entrapment.

According to the Darke County Sheriff’s Office, a preliminary investigation revealed that a maroon 2003 Chevrolet Malibu, driven by Timothy Lavy, 19, of New Paris, Ohio, was traveling east on U.S. Route 36 West when, for unknown reasons, his vehicle crossed left of center and struck the wheels of a westbound white 2016 Freightliner semi-tractor and trailer, driven by Michael Jackson, 63, of Baltimore, Ohio, resulting in heavy front end damage to the Malibu.

Lavy was mechanically extricated from his vehicle prior to being treated on the scene by Tri Village Rescue for what deputies described as serious but non life-threatening injuries. He was then airlifted by MedFlight to Miami Valley Hospital where his condition remains unknown at this time. Jackson was examined on the scene, refusing any further treatment and transport to a medical facility.