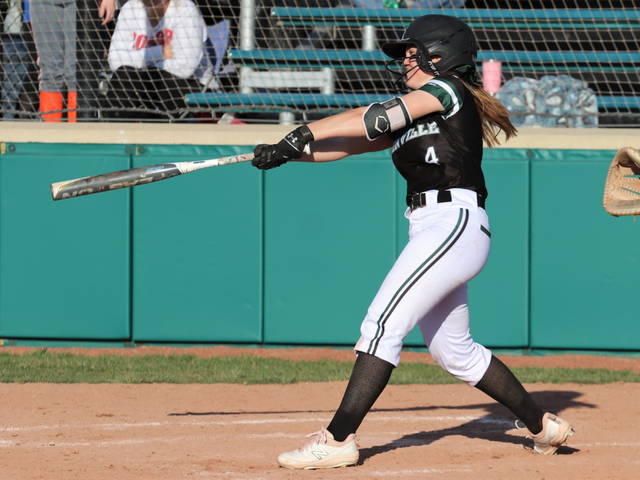 SIDNEY – The old cliché, “good teams find a way to win” could not have been more-true in the Lady Wave’s extra-inning come from behind victory over the Sidney Lady Yellow Jackets in a matchup between the MVL’s two division leaders, Greenville first in the Miami Division and Sidney holding down the top spot in the Valley Division.

Trailing 1-0 with two outs and down to its last strike in the seventh and final regulation inning, Greenville sophomore Alaina Baughn, the MVL’s leader in home runs and RBIs drilled a 2-2 pitch to center scoring Savannah Leach with the tying run to give the Lady Wave new life with the score tied at 1-1.

“Down 1-0 in the seventh and scored with two outs on a Baughn hit,” said Greenville coach, Jerrod Newland.

The Lady Jackets opened the bottom of the seventh with a single to right followed with a ground out advancing the winning run to second with one out setting up an inning ending double play sending the game to extra innings.

Bri Fellers followed with a single to center, Kierah Beavens reached by way of a hit batsman and sophomore third baseman Ashlynn Zimmer stroked a 2-out, 2-run double to left plating Fellers and Bevins upping the Lady Wave’s to 4-1 with Sidney coming to the plate in the bottom of the eighth.

“KJ (Kenna Jenkinson) homered in the eighth to put us up one,” Newland stated, “and Zimmer scored two on a double.”

Grace Shaffer set the Lady Jackets down in order with the final out of the game coming by way of a strike out; the senior’s eighth of the night to earn the win.

Shaffer earned her 17th win of the season allowing 1-run on 6-hits, surrendering 2-walks while striking out eight.

Kenna Jenkinson was 1-3 with a RBI and a run scored, Ashlynn Zimmer went 1-2 with 2-RBIs and Alaina Baughn was 1-5 with a RBI.

Savannah Leach went 1-3 with a walk and a run, Susie Blocher was 1-4, Beavins scored a run and power hitting Nyesha Write had 3-walks on the night.

With the win the Lady Wave stands at 22-1 on the season and 15-0 in Miami Valley League play.

The Lady Wave will honor two seniors tonight, Wednesday, May 5 in a double-header when the West Carrollton Lady Pirates come to town with a 5 p.m. start time at Lady Wave Stadium.