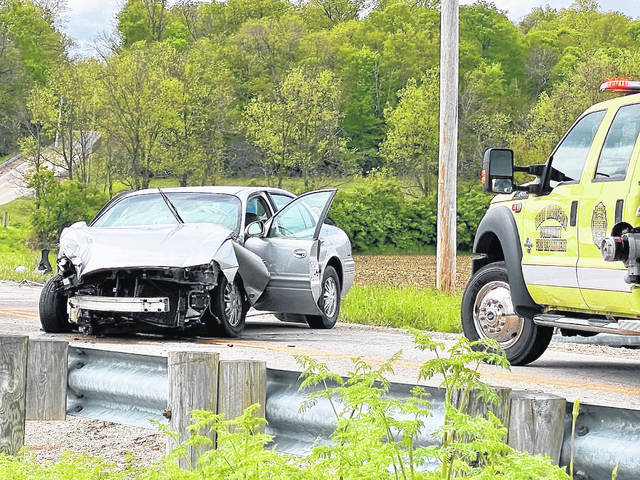 NEW MADISON — Multiple injuries were reported Monday afternoon following a head-on collision on the outskirts of New Madison that had two people airlifted from the scene.

At approximately 3 p.m., emergency personnel from the New Madison Fire Department, Tri-Village Rescue, Arcanum Rescue, NorthWest EMS, MedFlight and CareFlight responded along with deputies from the Darke County Sheriff’s Office to the 2000 block of Mills Road in reference to a two-vehicle injury crash with entrapment.

According to the Darke County Sheriff’s Office, a silver 2002 Buick LeSabre, driven by Amos Weimer, 17, of New Madison, was traveling eastbound on Mills Road. Weimer, for unknown reasons, lost control of his vehicle and drove off the right side of the roadway while negotiating a curve, then over-corrected causing his vehicle to travel left of center. Weimer’s vehicle then collided head-on with a westbound gray 2006 Chevy HHR, driven by Kathryn Osborne, 41, of Hollansburg, which was also occupied by two male juvenile passengers.

Mrs. Osborne was extricated by non-mechanical means from her vehicle and treated by Tri-Village Rescue prior to being airlifted from the scene by MedFlight to Miami Valley Hospital, for what were described as serious but non-life-threatening injuries. Mrs. Osborne’s 14-year-old son was treated on the scene by Arcanum Rescue and also airlifted by CareFlight to Miami Valley Hospital. A second 16-year-old minor child, also a son of Mrs. Osborne, was treated on the scene for minor injuries and released to family members before refusing any further treatment and transport to a medical facility.

Mr. Weimer was treated at the scene by NorthWest EMS prior to being transported to Reid Hospital in Richmond, Ind., for what were described as minor injuries.