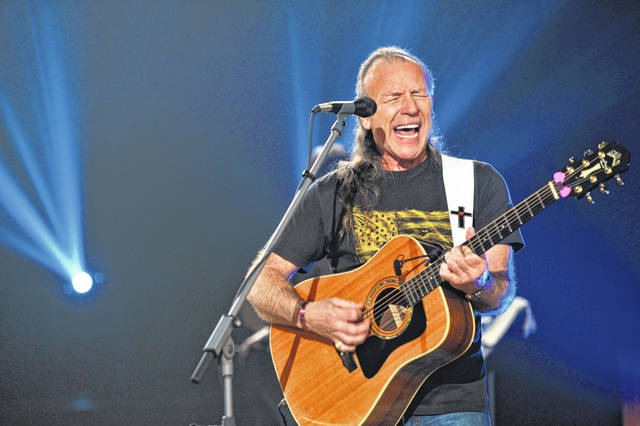 VERSAILLES — Musician Mark Farner considers himself a rock patriot. As the son of a World War II veteran, and the platinum-recording frontman for the original Grand Funk Railroad, he’s not very far off.

Farner grew up in Flint, Mich., and got his start in music at weekly jam sessions with family.

“We would have everyone in the family play,” he said. “My grandpa played fiddle and banjo, Uncle Woody played the guitar and sang, my dad blew saxophone and played guitar. But when the women sang, it was like, ‘Oh my god.’ This music really got into me, it got me interested in wanting to be in music as a youngster.”

Farner took baby steps into music as an adolescent through school choir, guitar lessons and then jumped from band to band until he and the rest of Grand Funk Railroad got a chance to prove themselves.

From there, it was full speed ahead into rock n’ roll stardom for Farner and the band. While leading Grand Funk Railroad, he shared the stage with legendary acts like Jimi Hendrix, Janis Joplin, The Doors and many others. His band scored two number one singles on the Billboard Hot 100 with “We’re An American Band” and “The Loco-Motion.” Additionally, they’re known for hits like “I’m Your Captain (Closer to Home),” “Heartbreaker” and “Bad Time To Be In Love.” With hits such as these, Farner became platinum-recording artist 30 times over and the Grand Funk Railroad sold out Shea Stadium faster than The Beatles.

Farner said this phase in his life is a “pinch-me experience” to this day.

Later in life, Farner continues to tour with Mark Farner’s American band. The band will hold its first concert since the COVID-19 outbreak on Saturday, May 15, at the BMI Events Center in Versailles with special guest John Corabi of Motley Crüe.

“I’m very excited to play because this will be our first performance as a band together in over a year,” Farner said. “We are like the bull getting ready to bust out of that shoot.”

General admission tickets for Farner’s show this weekend in Versailles are $25 in advance and $35 the day-of-show. Doors open at 5 p.m. and the concert starts at 6 p.m. You can purchase tickets here: https://bit.ly/3fegCAF