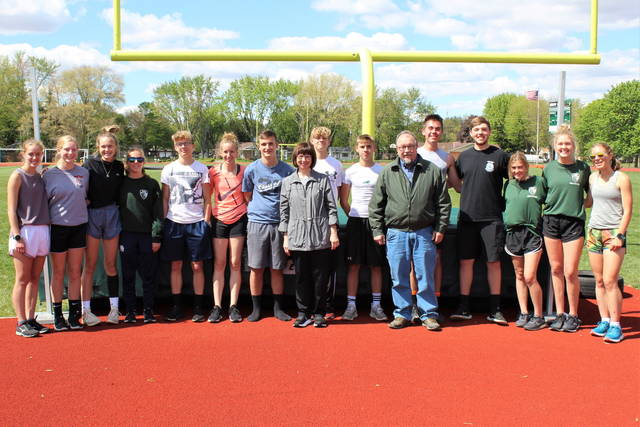 GREENVILLE – The Marchal family recently donated a state of the art high jump mat and pit to Greenville Schools in memory of their son, Adam Marchal.

Marchal. A 1999 Greenville Senior High School graduate and son of Colleen Marchal and Frank Marchal was a standout track and field athlete for the Green Wave.

“We are very grateful we were able to do this as a family,” said Colleen Marchal. “Adam would have really appreciated this.”

“This is something hopefully that will serve the high school high jumpers for years to come,” continued Marchal. “We are just very pleased that they took the time to have a nice dedication ceremony and a nice plaque in honor and memory of Adam – it means a lot.”

Members of the GHS track team, coaches and administration were on hand for the Wednesday afternoon ceremony to honor Adam.

“It’s nice to have the family here today and see what they have done for our kids,” said Greenville athletic director, Aaron Shaffer. “It was good for our kids to be here and see community members giving back to our school and our young people. It is important for our young people to see what you can do for someone else, that giving mentality that it is not always just about you. It has been an honor and a pleasure to work with Marchals to get this accomplished.”

“It’s overwhelming sometimes with the community support in a great way,” GHS Principal Stanley Hughes stated. “We are so appreciative from everything that the community provides but something like this provides a big purpose for us and the need and allows our students to become better every year. It allows our school district to be better too, so that support is really appreciated.”

“We really needed a new high jump pit because the old one went way back before Adam even participated in track,” said Greenville track and field coach, Bill Plessinger. “It was probably 25 years old. You would hit it and the dust would fly up in your eyes so safety wise it is a great mat. It’s top of the line and the kids love it. It’s been a great addition for our program.”

Adam was a member of the 1998 GHS record setting 4×100 relay team of Jared and Adam McClear, Kurt Baker and Marchall; a 43.82 record that still stands today.

“I coached Adam and we broke the school record in the 4×1,” Coach Plessinger said. “I coached him in junior high and then high school – we were really close. Both of his parents had my father as a teacher at Versailles so before I ever coached Adam I had a history with their family.”

“Adam was a great kid,” continued Plessinger. “He was that gangly kid growing into his body in junior high and then you saw him mature.”

“I committed from junior high that that was the four that was going to run,” Coach “P” said of the record setting 4×100 team. “We started exchanges the first day of practice, we practiced everyday and it was a good group of kids. They were magic. Adam was one of those kids that was way faster, way better track athlete than just looking at him. He was a good track athlete.”

“That record still stands,” Coach Plessinger added. “It is going to stand for a while.”

“It’s been a long time coming,” Shaffer concluded. “We have had the mat since the winter of 2019 (no 2020 season due to COVID) but we wanted to make sure we memorialize it appropriately with a granite marker for the years to come and that Adam could be recognized and memorialized for his contributions here as an athlete and as a young person at Greenville.” 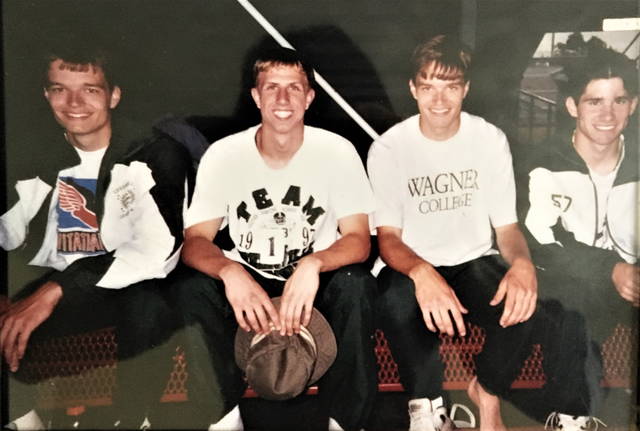 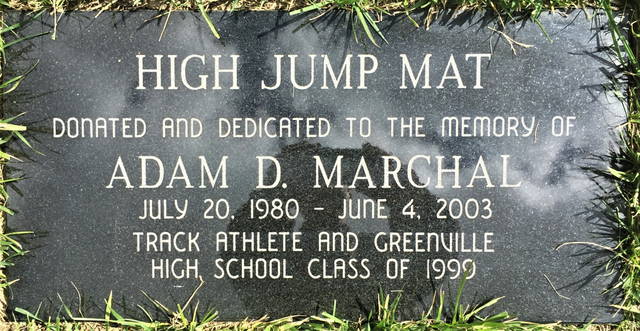