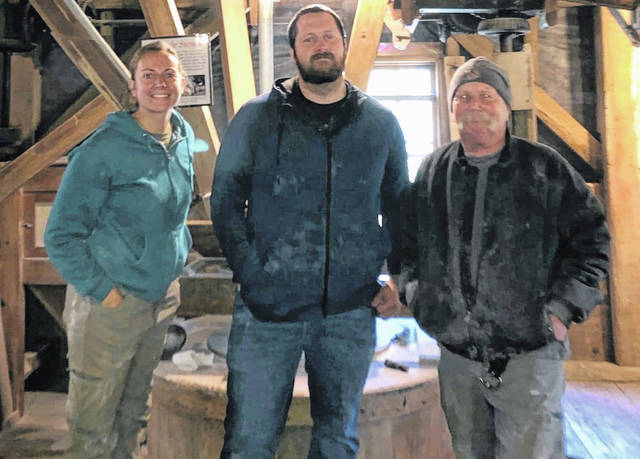 These two staff members will be apprentices to the Master Miller, Terry Clark, at the Historic Bears Mill. They will also be maintaining the mill and grounds.

Thom Hammaker has been an experienced journeyman carpenter for 7.5 years. He is married to Kandace Hammaker and has three children. He says he feels he has a special connection with the mill because his late grandfather, Bill Wilson, would take him canoeing on the Greenville Creek, taking out at Bear’s Mill where they would then visit.

Sophie Nieport lives on a farm outside of Ansonia with her husband Scott Nieport and son Jacob O’Connor. She worked as a Registered Sanitarian for the Darke County Health Department for 10 years, then was the Education and Outreach Coordinator for the Shelby Soil & Water Conservation District in Sidney for two years. She says she is thrilled to be working for the Darke County Parks and understands being an apprentice to Terry Clark is a once in a lifetime opportunity and will enjoy every minute of it!

Both Thom and Sophie will be learning the ins and outs of the mill from Terry Clark. Terry and his wife Julie purchased the mill in 1979 and after months of hard work, the mill was reopened. Terry mastered milling and the couple made the mill an attractive tourist and local attraction by adding the gallery, enhancing the store, replacing the siding and preserving the mill to the beautiful condition you see today. Terry and Julie sold the mill to the Friends of the Bears Mill (501C3) in 2013 through a grant provided by the Ohio Public Works Commission (OPWC). Darke County Parks and the Friends of the Bears Mill have collaborated together for more than a year and a half to have the ownership of the mill transferred to Darke County Parks. It was approved for transfer by the OPWC and Probate Judge Jason Aslinger.

“We are very excited to have one of the last working water mills east of the Mississippi River” stated Parks Director Roger Van Frank. “We look forward to having the mill opened for extended hours and special groups joining us.”

For more information on the Mill and hours of operations and special requests please contact the Park District at www.darkecountyparks.org or www.bearsmill.com