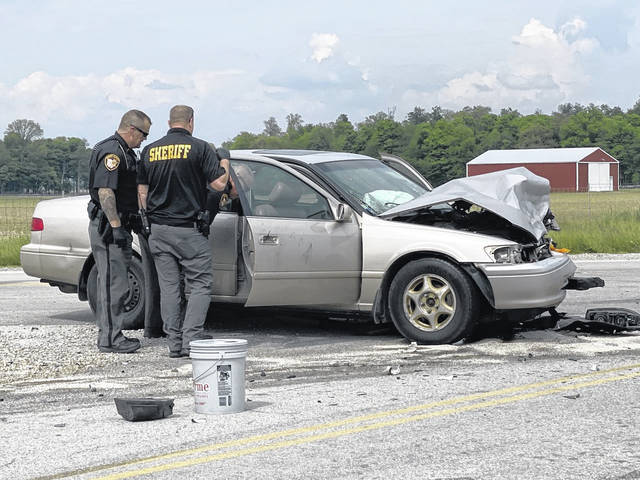 ARCANUM — A head-on collision Wednesday afternoon ended with injuries to four people and the arrest of a driver on an outstanding felony warrant.

At approximately 3:51 p.m., emergency personnel from Arcanum Fire and Rescue responded along with Darke County deputies to the 3000 block of State Route 49 in reference to a two-vehicle head-on injury crash.

According to the Darke County Sheriff’s Office, a preliminary investigation revealed that a silver Toyota Camry was traveling north on State Route 49 when the driver, for unknown reasons, lost control and crossed left of center striking a northbound maroon Buick Le Sabre head-on.

The female driver of the Buick, as well as her juvenile passenger, were treated at the scene by Arcanum Rescue prior to being transported to Wayne HealthCare for what were described as non-life-threatening injuries.

The male driver of the Toyota, as well as a female passenger, were also treated at the scene for non-life-threatening injuries before being transported to Wayne HealthCare for further treatment and evaluation.

Following his release from Wayne Healthcare, the unidentified male driver of the Toyota was taken into custody by Darke County deputies on an outstanding felony warrant out of Montgomery County for narcotics violations. Deputies stated additional charges may be pending following a search of the male subject’s vehicle that led to the discovery of what were only described as possible narcotics.