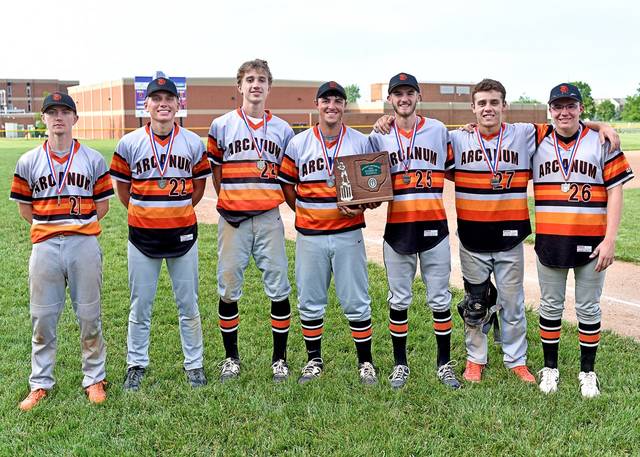 MIAMISBURG – The Arcanum Trojans Baseball Team upset No. 2 Mechanicsburg to win a sectional championship and was looking again to play the spoiler in their match-up with Cincinnati Country Day in the OHSAA Boys DIII District Title match-up.

Country Day would throw a power pitcher at Arcanum who brought a lot of heat, something that Arcanum rarely sees during the regular season.

“We haven’t seen a pitcher like this all year, Arcanum Baseball coach Randy Baker said. “He throws it hard, and we just don’t see that a lot,” he added.

But that didn’t intimidate the Trojans as the second batter senior Logan Statsny stayed patient and drew a walk to get a runner on base with one out to start the game.

Sophomore Jaxson Christ then worked a 3-1 count ripping a double that sent Statsny to 3rd base and now two runners in scoring position with just one out.

That seemed to rattle Country Day ace Jackson Campbell and while throwing to senior Brody Williams he let one get away as Williams skipped out of the way with the ball going under his feet and by the catcher.

Statsny who was very alert took off immediately sliding into home plate before the throw from the catcher to the pitcher arrived to give Arcanum a quick run in the game.

The Trojans would leave Christ on base after that … but more importantly they got the kind of start they needed to build confidence and momentum taking a 1-0 lead after the first inning.

“With their pitcher throwing so hard we had to adjust quickly and to be able generate a run early in the game with Jackson Christ hitting a double, well that was huge,” Baker stated.

Starting pitcher Brody Williams was in a groove for the first three innings retiring the side every batter he threw to in order.

But in the top of the 4th inning after walking off the leadoff hitter, Country Day finally got something going and they would score 2 runs to go up 2-1.

Trailing now for the first time in the game Arcanum would come right back in the bottom of the 4th.

Senior Cameron Burke got it started immediately with a single that was follow-up with another base hit from senior Carter Rhodehamel and the Trojans were in business with Burke at 3rd and Rhodehamel at first and no outs.

The next batter struck out but was followed up by junior Ian Baker who drew a walk to load up the bases.

The Trojans left 3 runners on base in the first and second innings and didn’t want to waste another opportunity.

Leadoff hitter Junior Dan Albright came up with up big hit by lining one hard in between the shortstop and 3rd baseman to plate Burke and the Trojans tied the game at 2 with the sacks still loaded up.

Statsny then hit one hard down the third base line but a great play by the 3rd baseman was made and he fired home to knock off Rhodehamel and the go-ahead run … but Country Day was unable to turn a double play and Arcanum still had the bases loaded with two outs.

Jackson Christ would come up big one more time as the lefty pulled one into left field that would plate two runners; Ian Baker and Dan Albright as the Trojans went up 4-2 heading into the top of the 5th inning.

Arcanum made a pitching change and the Nighthawks vision seemed to improve as they had a big inning scoring 4 runs to answer and retake the lead 6-4.

Arcanum would go down in order in 5th and 6th innings while Country Day added on more run to go up 7-4.

The Nighthawks starting pitcher after throwing to one batter finally reached the pitch count limit (125) in the final inning giving Arcanum one last hope of touching off the new pitcher encouraged by Coach Baker who could be heard telling his guys “we can do this; we can get this guy.”

But the reliever throwing was the same guy who just threw a one-hitter in the last game to help Country Day win their own sectional title.

With one out Jackson Christ worked a walk followed by a fly ball from Tegtmeyer to the left fielder for the 2nd out. Senior Zach Ullery then ripped one up the middle to give Arcanum runners on 1st and 2nd with two outs a glimmer of hope.

Senior Nick Fry then hit one hard but right at the second baseman who was able to toss it to first for the final out to end the Trojans District Title run.

Talking with Coach Randy Baker after the game you could tell he knew that if they could have stayed out of that one big inning, they had a chance to upset Country Day.

“If we stay out of that big inning, we’re right there at the end … but a lot of credit goes to Country Day, they are a very good ball club,” Baker stated.

“Even till the last out we battled, and I told our guys I’m very proud of them,” Baker praised.

“We have 7 seniors on this team, and they didn’t want this to end. I’m proud of the senior group, what a great bunch of kids, very hardworking, they are one of the best senior classes I’ve had. They just work, never complain, did what I ask them to do and it’s not easy to play in this program because I’m hard on them, they took it andworked their tails off to get here. They been good role models for our underclassmen to learn from and I’m very, very proud of them for that,” Baker concluded. 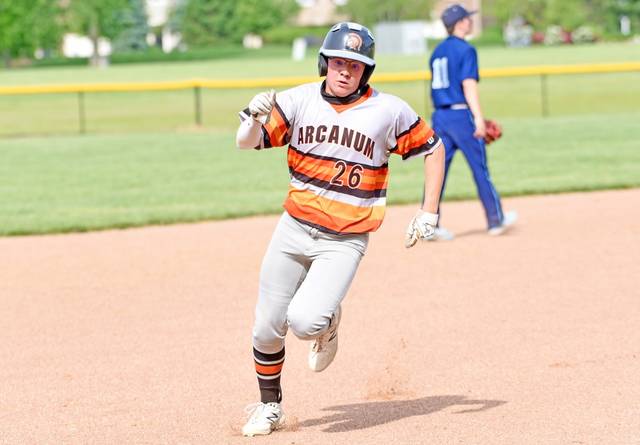 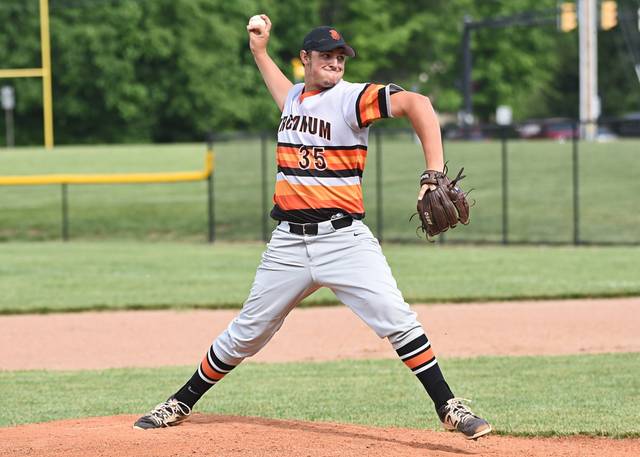 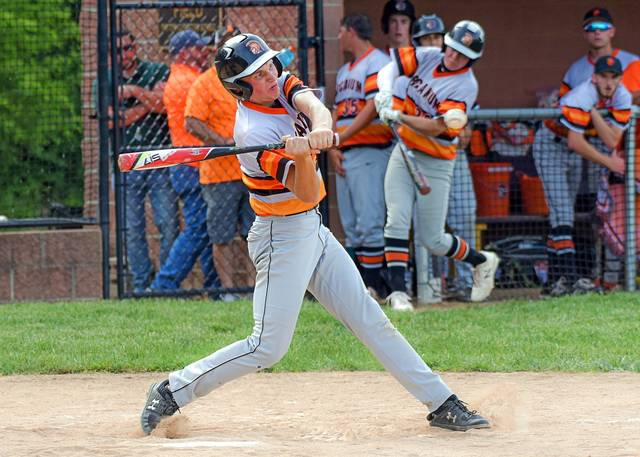 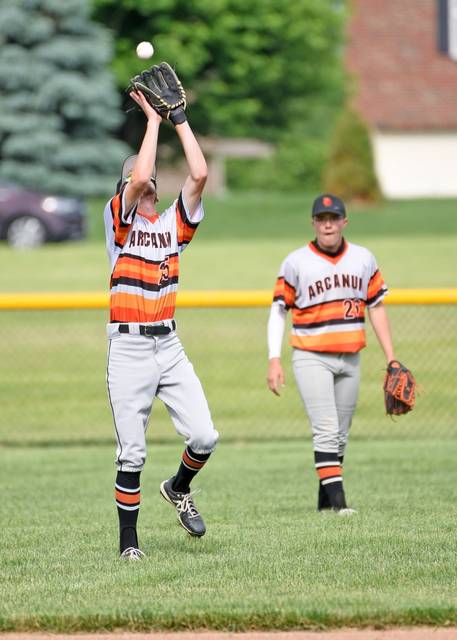 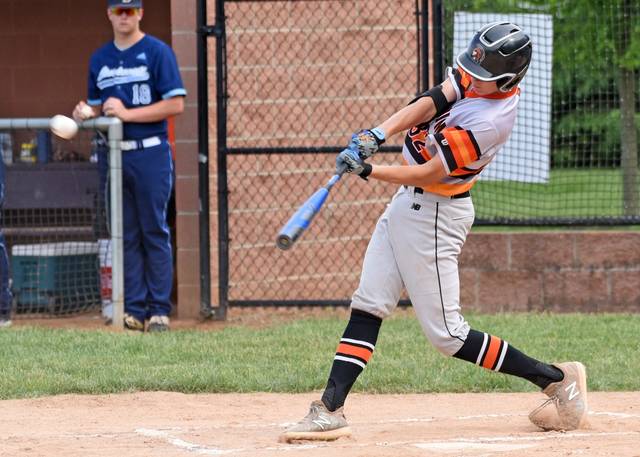 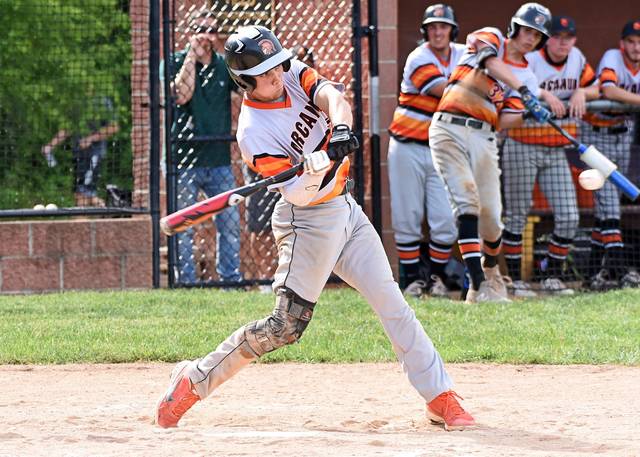 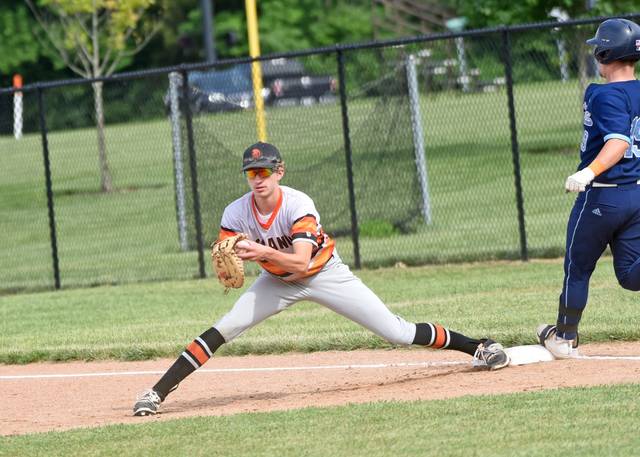 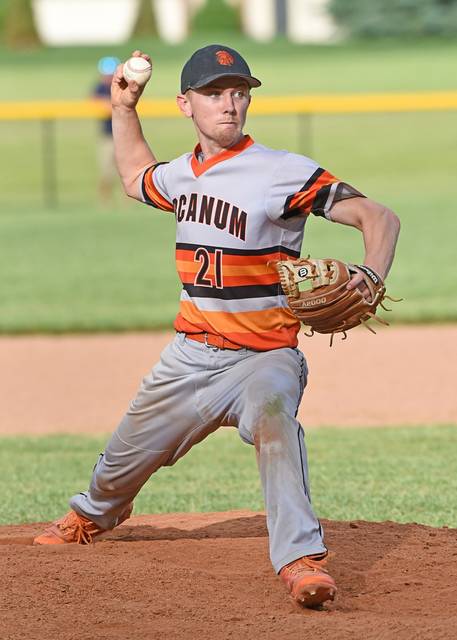