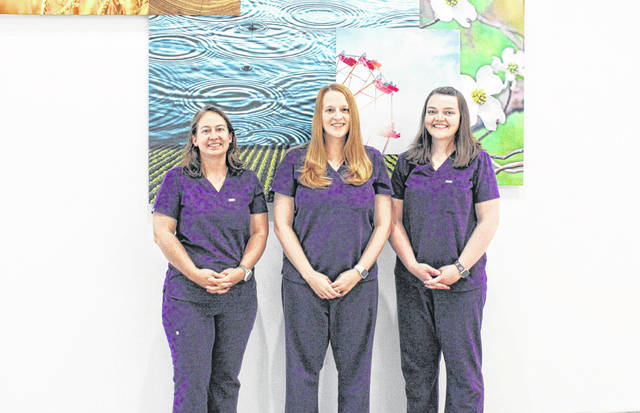 GREENVILLE — At Wayne Healthcare, all of the surgeons are female. This is a far cry from most hospitals in the United States.

According to the American Association of Medical Colleges, women make up less than 25 percent of the 10 surgical specialties.

Dr. Reiss, who is also president of the medical staff and medical director of oncology services at Wayne HealthCare, as well as an Arcanum native, said it’s necessary for patients to see themselves in their doctors.

“I think it’s important for our patients to have physicians that look like them and who are like them,” she said. “It’s important for some people to have a female surgeon. It’s nice that we can be part of that representation.”

The low number of female surgeons in America can be attributed to multiple causes; one being a lack of mentors.

“You’re a medical student and you’re on rotations but you just don’t see other women in the field or other women that are raising a family, or breastfeeding at work, or anything that might be important to you, you just don’t see that,” Dr. Reiss said. “I think a lack of role models plays into it too, when you see someone else who does something, you think, ‘Oh, I can do it too.’”

In addition to a lack of role models, women are often widely discouraged from pursuing careers in surgery.

Dr. Reiss acknowledged the outdated assumption that women can’t balance a surgeon’s work-load as a mother and wife.

While work-shadowing as a high school student in Darke County, she said she was advised that if she wanted to be a mother, it would be impossible for her to pursue a career in surgery.

“People I worked with were like, ‘Oh, if you want to have a family, don’t go into surgery,’” she said. “I was almost counseled against it from the time I was doing shadowing experiences in high school until now. There was a lot of that. I just pushed past it and said, ‘I’m going to do what I think is important and right for me.’ I definitely did get overtly, ‘You can’t do both, you’ll quit.’”

When women finally do bridge the gender gap and enter surgery, they often face gender discrimination from their peers or their patients. According to a study published in the New England Journal of Medicine, nearly two thirds of female surgeons-in-training experience discrimination.

Dr. Schultz said the sexist microaggressions she’s experienced are always unexpected, but said that she deals with the comments by calling them out.

“It comes in surprising ways,” she said. “Today I was talking to my colleague and he called me, ‘dear.’ It came out of nowhere and I was stunned, and I’ll have to follow up on that. I think facing it, calling them out on it and moving on and not perseverating on it is how I deal with it. I think if you don’t say something, if you don’t call people out or draw attention to it then it’s just going to persist.”

All three surgeons acknowledged other occurrences of subtle discrimination that they encounter regularly. Often the doctors are referred to by their first names rather than their titles by patients and peers, or pet names like Dr. Schultz was recently called like, “honey,” “sweetie,” and “dear.” While it seems minuscule, the doctors said they’re often referred to by their first names or pet names in the same breath their male coworkers are referred to as “doctor.”

The surgeons at Wayne HealthCare prove there is a change occurring in surgery. Women are entering the field, but it will take time for younger women in our community to be impacted by surgeons like Dr. Schultz, Dr. Buchanan and Dr. Reiss, and complete the rigorous medical school track it takes to become a surgeon.

Dr. Schultz said it’s a slow process, but she believes the industry is on its way.

“If you think about the pipeline, the track from the first year of medical school to actually working is almost a decade,” she said. “It’s a slow process of change because you’re thinking the people that we’re influencing in the community; high school women, or even college women, they’re still 10 years from graduating as a surgeon so it’s taking a long time.”

Dr. Buchanan, who is also the chair of the department of surgery at Wayne HealthCare, reiterated that while the national numbers are very low, the number of female surgeons is slowly increasing.

“It’s very much discouraged for females to be surgeons but it’s getting better,” she said. “People are realizing that you can do things outside of the hospital, you can have other interests, family, those kinds of things. When you see that in other people, that translates and trickles down. Before, there weren’t many people in surgery, now there are much more. I think it’s positive for female medical students.”

In addition to role models like our female surgeons at Wayne HealthCare, international organizations such as Association of Women Surgeons (AWS), founded in 1981, are making a positive impact on women in surgery. The organization supports female surgeons in every stage of their career and allows for them to easily connect with other women in the industry.

Dr. Reiss said AWS is great for finding mentors and connecting with like-minded female colleagues from all over the United States.

“At every major surgical meeting there’s usually a subset of AWS at the meeting so you can get plugged in with colleagues from all parts of the country and age spectrum,” she said. “I’ve met a lot of women who are in their later careers that are almost at the point of having grandkids, you meet people who are almost a few years ahead of you, it’s just a nice mentorship program. It’s important to have women you can rely on and support.”

Surgery has a long way to go with gender reform, but the surgeons at Wayne HealthCare are proof it’s possible three times over.

Dr. Buchanan said like surgery, women have the ability to tap into any male-dominated industry.

“Not only is it possible to be a surgeon if that’s what you’re interested in, but any type of field you thought was only for men or limited for women, it is absolutely possible.”