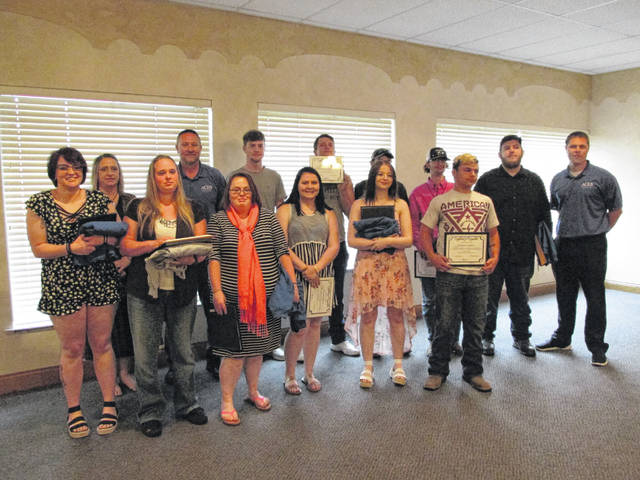 DARKE COUNTY — Jeff Vaughn, manager for the Achievement Center for Educational Success (ACES), congratulated the 17 high school graduates who completed their schooling through ACES on May 26. The keynote speaker was Lance Corporal Thadd Carden, USMC. Carden graduated ACES in 2018 and encouraged the new graduates to continue excelling in overcoming obstacles.

He said he enrolled in ACES when he was unsure of his direction, but he knew he was a “one-on-one” kind of learner and that was the help he received with ACES, an academic program with credentialed teachers who surround the student with customized instruction and additional mentoring, social services, art, exercise, and financial counseling assistance. He is now a diesel mechanic.

Carden said, “I’ve seen some cool places.” He is currently stationed in North Carolina and enjoys military service very much, commenting with a shy grin, “I get paid to shoot guns.”

The 17 graduates will receive diplomas from Darke and Miami County schools districts. On hand to commend the graduates were:

Vaughn said that this is the 21st year ACES served Darke County youth, and that the program had 840 students participate in the program. He added ACES has had 308 students receive their high school degree.

Vaughn advised the 45 students in the current school year to continue their pattern of surrounding themselves with positive people who cared about them and continue to serve their communities. Of the 45 students, 17 graduated, 28 advanced a full grade level and 25 students gained employment throughout the school year. Three students were accepted to the Miami Valley Career Center and will continue their studies next year. Toby Metzger, ACES teacher for Darke County, presented awards to the 17 graduates in attendance, most improved and most credits earned awards to other participants. Janet Julian, former Board Chair and current member of CORS, the non-profit organization that administers the ACES program, was also in attendance.

For more information about the ACES program, please visit: www.corsp.org.