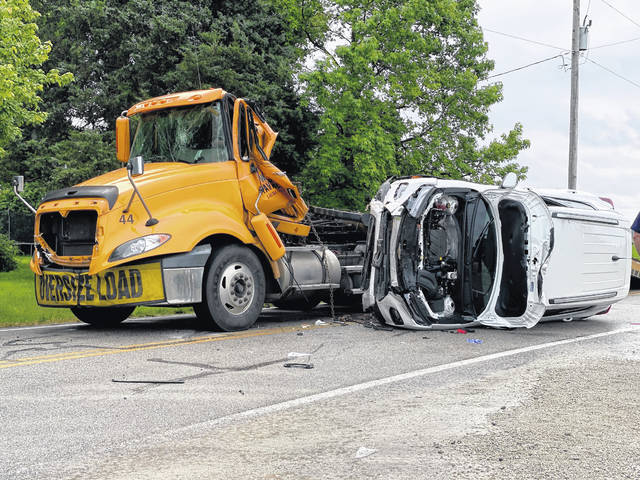 GETTYSBURG — The driver of an SUV suffered non-life-threatening injuries Monday morning after colliding into the rear of a parked semi-tractor and trailer on the outskirts of Greenville.

At approximately 10:28 a.m., emergency personnel from Gettysburg Fire and Rescue responded along with deputies from the Darke County Sheriff’s Office to the 6100 block of Arcanum-Bears Mill Road in reference to a rollover crash with entrapment.

According to the Darke County Sheriff’s Office, investigation revealed a white Chevrolet Trailblazer was traveling northbound on Arcanum-Bears Mill Road when the driver failed to notice and collided with an orange International semi-tractor and trailer stopped to unload heavy equipment. The SUV drove onto an empty flatbed trailer and, as witnesses described, went airborne before striking the cab of the unoccupied semi-tractor before coming to rest on its side in the center of the roadway.

The unidentified female driver of the Chevrolet Trailblazer was extricated by non-mechanical means from her vehicle prior to being transported to Wayne HealthCare for what were described as non-life-threatening injuries. No other injuries were reported as a result of the incident.