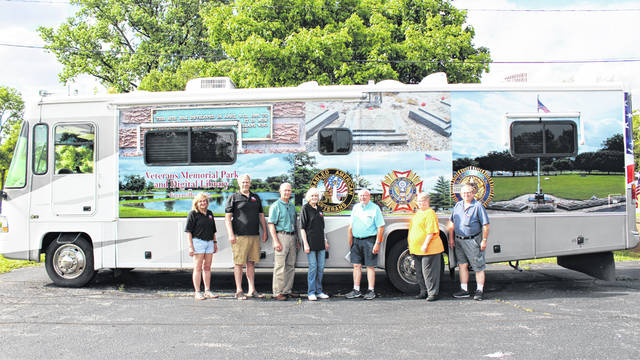 GREENVILLE — The Veterans Memorial Park and Digital Library has purchased a vehicle with a plan of creating a mobile studio to cover events, training and conventions. The digital library is in its sixth year of digitizing participating veterans’s oral histories, pictures and other sources of primary material.

Mike Maloney, Vice Chairman of the Veterans Memorial Park and Digital Library, said the library was born out of the urge to preserve history.

“We started it with the idea that so many posts were losing so many veterans without us actually getting their information, their records and their oral history. We wanted to try to develop how we collect that. We went around to some of the local folks and, Ryan Berry, who at the time was the editor of the paper, and he said, ‘Well, why don’t you marry up with the high school?’ Of course, it struck us that that was a great idea, so we did.”

The founders of the library then met with Lori Hoover, Interactive Media Instructor at Greenville City Schools to discuss a partnership and have since collaborated with the Interactive Media TV and Public Access Channel 5 at Greenville High School. This allows the digital library access to a studio and equipment for recording oral history, as well as this partnership gives high school students practical experience producing relevant material. In addition to that partnership, the library has collaborations with OhioLinks and the Library of Congress, and produces videos for the VFW, American Legion, Gold Star families and the Miami Valley Veterans Museum.

After meeting with Hoover and forming local partnerships, the library has had a talent show every year to raise funds and continued to expand the library online and on the road.

“We’ve done our best to not only record veterans and get their histories, but also through social media be a relevant news source for veteran issues,” Maloney said. “We’re really proud of the vehicle because that’s going to let us go from post to post for education and to continue to collect that information.”

The mobile studio is the first of its kind, Maloney said. He added that before the group invested in the vehicle, they were using the backs of their cars for interviews.

“To me, it’s very unheard of now,” he said. “We’ve been going to national conventions, state conventions and there are veterans there that we ask to contribute there. We were doing it out of the backs of our cars, this mobile unit is going to allow us to set up a studio where they can come in and tell their story, leave, hang out, whatever the case may be. We’re going to hit festivals and all kinds of other things that we’ll track.”

Moving forward, Maloney said the library puts a big priority on WII Veterans, but he believes no matter the veteran, it’s important to listen to their story, remember it and stand alongside them.

“We need this for history,” he said. “We need this so people have a clear understanding now more than ever because history itself at some points is under attack. When you have oral history of the people who were actually there, then it’s very difficult to dispute. WWII is our main target now, but Vietnam, there’s going to be a lot to unpack with the Vietnam veteran. There’s so much that those veterans brought back, that they didn’t want to bring back, that’s why we need to have those type of discussions to help them unpack and to help them know they aren’t by themselves.”

If you know of a war veteran willing to speak with the The Veterans Memorial Park and Digital Library, or you would like to donate to support the library, email [email protected] or call the Greenville VFW Post at 937-548-4004.