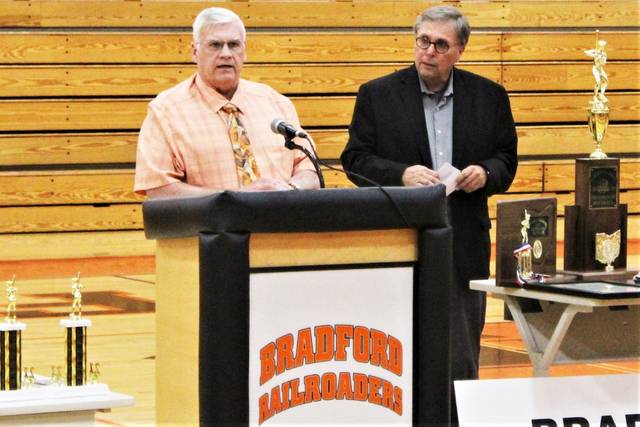 “We had a great opportunity to spend some time at Bradford with the girls softball team that won the State Championship this year,” said Darke County Commissioner, Larry Holmes. “It is a nice group of young ladies, academically they come in at 3.82 setting a team record as well as 13 new OHSAA and school records throughout the year.”

“The thing that most surprised me besides all the ladies being really great athletes and all the records they set on the field was the GPA average of 3.82.” Darke County Commissioner Michael Stegall stated.

“ I think if you took my grade point average and added it for four years it wouldn’t wouldn’t have come up to 3.82,” Stegall added with a chuckle, “so congratulations to those girls on a really fine year and we are very proud of them here in Darke County.”

Whereas, The Lady Railroaders also set the record for the most wins ever for the sport, that bein 33-2; and

Whereas, The “Lady Railroaders” made it clear who the top D-IV Softball Team was after a number four final ranking; and with this significant win, people will now know where Darke County is, where the town of Bradford is; and more importantly the D-IV Lady Railroaders Softball team is from; and

Whereas, The “Lady Rialroaders and Coach Shon Shaffer” agreed that they didn’t want to see this end; Coach Schaffer stated that this group of ladies is the most talented group that he has ever coached; and

Whereas, This team of young ladies have now set a standard for others to emulate; the team consist of five (5) Seniors, who have provided great leadership this season; and in the off-season, the ladies agreed that a lot of work needs to be done to replace this great group of ladies; and

Whereas, with this State Title, Bradford has turned the corner, in that this once non-descript small school in southwest Ohio is now in the spotlight; WE, the Darke County Board of Commissioners couln’t be prouder; WE THEREFORE

DECLARE, THAT TODAY, WEDNESDAY, JUNE 16, AS