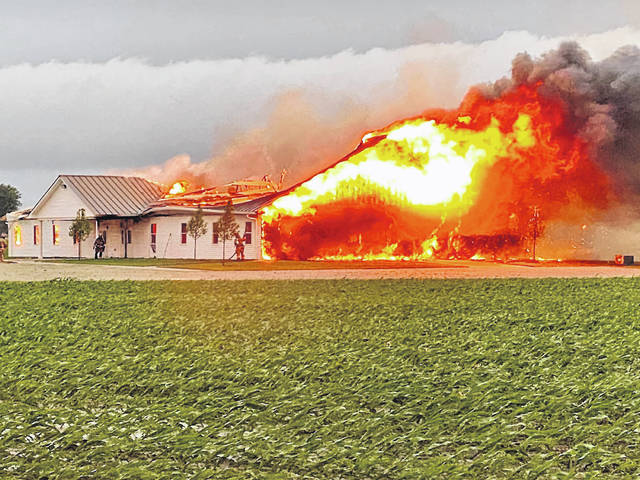 At approximately 6:30 a.m., emergency personnel from the Pitsburg Fire Department and Arcanum Rescue responded along with more than a dozen different mutual aid departments to the 8300 block of Delisle Fourman Road in reference to a fully evolved structure fire at the Shiloh Meeting House of the Old German Baptist Brethren Church.

According to Chief Tracy Mong of the Pitsburg Fire Department, firefighters arrived on the scene to find heavy smoke and flames showing from the church’s roof, prompting a call for a fourth alarm.

“We immediately called for a second alarm as soon as it was reported that smoke and flames were showing”, said Mong. “We requested a third alarm while en route, about half a mile outside of the village, where we able to see the size of the fire.”

Firefighters battled the harsh conditions, including heavy rain and wind, from the remnants of a storm front that prompted multiple severe thunderstorm and tornado warnings as storms passed through the county throughout the previous evening and overnight. At this time it’s unclear if weather played a factor in the start of the fire.

“Investigators will look into weather reports and mapping of lightning strikes in the area to help determine if the weather was a contributing factor,” said Mong.

Although the church and its contents within were deemed a total loss, no monetary estimate of the damage was made available.

No injuries were reported as a result of the fire. The cause and nature of the fire remain unknown while the incident continues to be under investigation by the Pitsburg Fire Department and the State Fire Marshal’s Office.