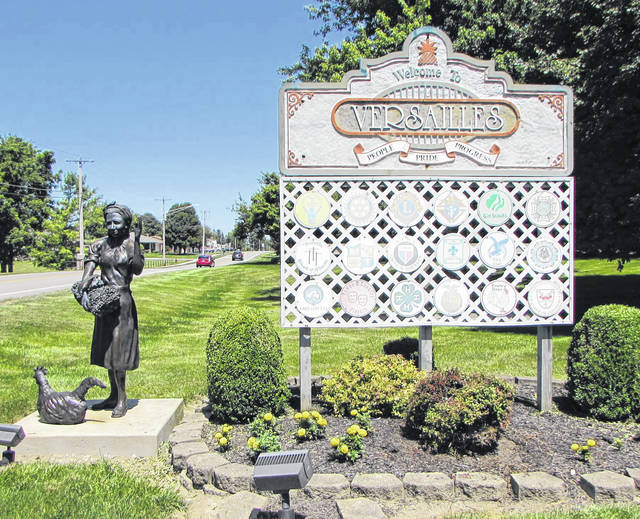 The council’s first order of business was hear a report on the progress of hiring an SRO to serve in the Versailles Exempted Village Schools for duration of the 2021-2022 academic year. Police Chief Bolin reported that he met with the Versailles School Board last week, and they hope to have someone in place by the beginning of the school year.

Mayor Jeff Subler commented on the Hotel Project ceremony on Monday, June 21, to commemorate the top beam raising for the project, stating that it was a great moment for Versailles.

“It was a really neat ceremony. The weather held off…so it’s onward and upward!” said Subler.

Village Manager Mike Busse presented his report, stating that five homes on Klipstine Road have now been connected to Village sanitary and water, with more to follow. Also, Tom’s Construction has completed the installation of curbs and gutters, and is currently working on sidewalks and approaches. In addition, the Electric Department is in the progress of relocating poles along Maple Street to allow for the street project curbs and sidewalks. Busse invited all residents to attend a ribbon cutting ceremony to celebrate the Virginia Street Project’s completion on Wednesday, June 30, at 7:30 a.m.

Busse also noted that he is working with the MVRPC to develop a scope of work for a traffic study on the need for a truck route in the Versailles area.

In addition, Busse addressed the circuit failure along the railroad tracks west of North West Street, due to trees coming in contact with overhead power lines. Although this area was trimmed before, it will need to be trimmed again.

“Eventually, these lines will have to be relocated, but in the short term, we’ll keep trimming the trees,” said Busse.

Also, The Village Pool Party has been scheduled for Sunday, July 25, from 5 to 8 p.m. Cost is $1 for pool pass holders, $2 for those without a pool pass. Parents chaperoning children will not be charged.

Busse also noted that the Street Department set up barricades and providing additional trash and recycling containers for the Western Ohio Biking Association (WOBA) at Heritage Park, and will be picking them up after the event. Heritage Park will be billed for the water and trash services.

Fiscal Officer Kathy Ording discussed the impact of the proposed reduction of ARPA funds, from $500,000. to $268,162.71, citing that townships are now deemed eligible for ARPA funding. This proposed reduction stems from amendments to SB 111 introduced by the Ohio House Finance Committee.

“We are not opposed to townships getting the resources,” said Village Manager Busse. “But we are opposed to funds earmarked for smaller municipalities being distributed to the townships.”