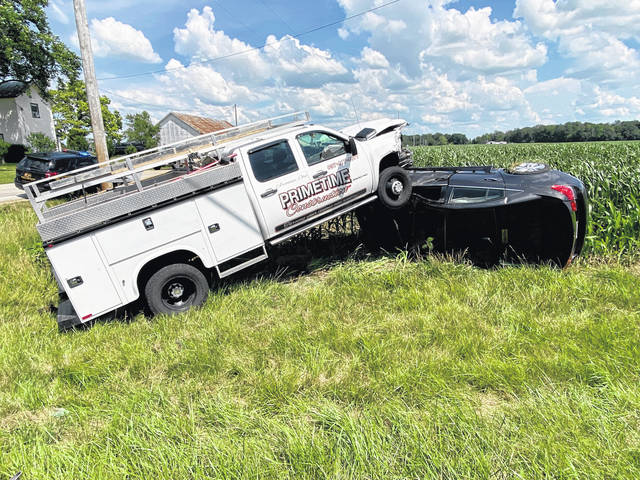 BUTLER TWP. — A teen driver as well as her juvenile passenger were injured Tuesday afternoon in a two-vehicle crash that left a pickup truck sitting atop a car.

At approximately 2:56 p.m., emergency personnel from Tri-Village Rescue and the New Madison Fire Department responded along with Arcanum Fire and Rescue and Darke County Sheriff’s deputies to the intersection of U.S. Rt. 127 and St. Rt. 503 in reference to a two-vehicle injury crash.

According to deputies, a preliminary investigation revealed an eastbound 2014 Chevrolet Cruze, driven by Annalise Arnett, 16, of Greenville, was stopped at a stop sign at the intersection of SR 503 and U.S. 127 when Ms. Arnett failed to notice and pulled into the pathway of oncoming traffic. Ms. Arnett’s vehicle was struck by a southbound 2010 Chevy Silverado 3500, driven by James Miller, 37, of Arcanum, resulting in both vehicles traveling off the southeast side of the roadway. Arnett’s vehicle rolled as a result of the collision and came to rest at the edge of a corn field. The Miller vehicle once again struck the Chevrolet Cruze coming to rest on top of the vehicle.