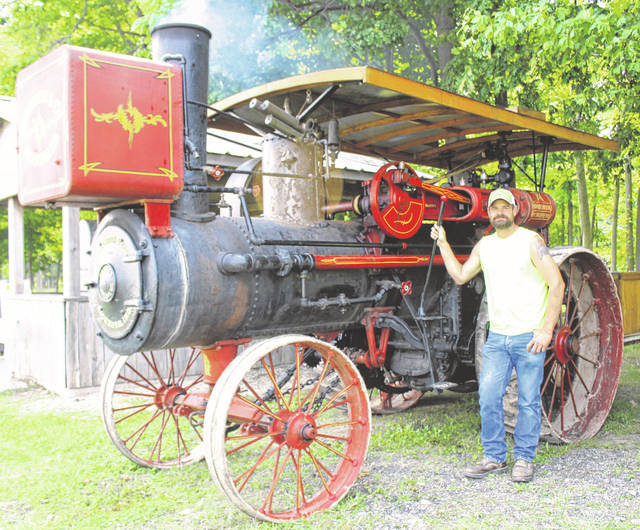 BEAMSVILLE — The Darke County Steam Threshers Association made noise — and a lot of steam — over the 4th of July weekend.

For Larry Simmons, food and trains make the best combination, as he made pork loins in his steam engine.

“On the railroad, they used to cook things like bacon all the time,” Simmons said.

There are only six Robinson engines in the states, and Simmons is the proud owner of one. Owning an engine had always been a dream of his ever since he was young boy. Once his father took him to Steam Thresher events, he was hooked.

“Once it gets in your blood,” Simmons said, “It doesn’t come out.”

Simmons’ Robinson engine is 110 years old. He says it is nice to preserve a piece of history that has revolutionized and modernized agriculture.

Simmons isn’t the only one to fall in love with history. Kyle “Blue” Gayheart shares the same love and passion.

While observing the engine, Simmons and Blue wondered what the stories would be like if the Robinson could talk about the places she’s been and the things she had seen. Well, the engine may not have been able to talk, but at noon, this little engine could whistle.

“You can hear the whistle from four miles away, “Simmon said. “They would use it for codes like bring me water, food, help, etc.”

The whistle on the engine was also used for workers in the field to signify dinner time. Not only would the whistle communicate to the workers, but to the wives at home doing the cooking saying “honey, I’m coming home.”