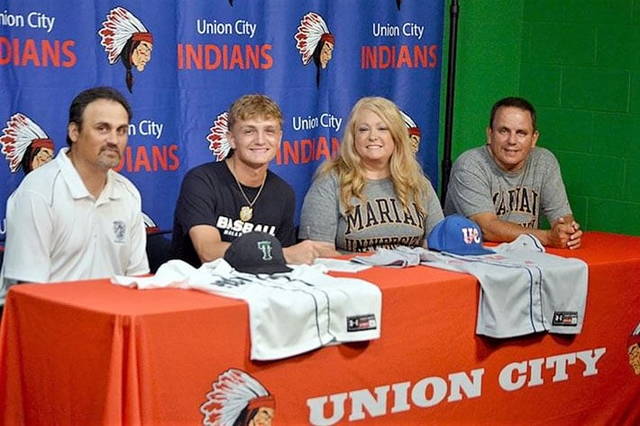 UNION CITY (IN) – Hunter Reagan, the son of Scott and Rhonda Reagan signed to continue his education while playing baseball for Marian University located in downtown Indianapolis, IN.

“I am looking forward to be able to do what I love at the next level,” said Reagan. “It is a great opportunity, great school for education as well, not only athletics but also a great baseball program and athletic program in general. I am really excited to keep that going.”

“Hunter is an unbelievable athlete,” said American Legion Post 140 coach, Chad Henry. “He does everything well, he fields the ball well, he has a great arm, he has a good swing. The biggest thing about Hunter – you’re getting a competitor.”

“The guy goes out there and he competes,” continued Henry. “He has that niche, he’s got that tick, when the going gets tough he steps up to the occasion. Being a three sport athlete you can tell, the guy is a competitor.”

Reagan has yet to be penciled in as to where he will be used with the Marian baseball program having had a successful career fielding, hitting as well as an outstanding pitching career at the high school level.

“I’m not sure if I will be two-way,” Reagan stated. “They don’t do a lot of two-way players playing the field and pitching at the college level. Coach Bacon (Marian head baseball coach, Todd Bacon) said in our fall league we’ll figure that out and get the kinks knocked out and see where he sees everyone at and see if I would be a PO (pitcher only) or play the field. Most likely it will be one or the other. I’m guessing I’ll probably pitch – I’m guessing I’ll probably be a pitcher.”

Reagan plans to study Nursing with hopes of continuing his education in the medical field after graduation from Marian.

“I want to help people in the medical field, get a nursing degree and use that,” said Reagan. “I may go to medical school after graduation to be a doctor.”

‘It was a great way to go out this year,” Reagan noted. “We won a sectional championship and I am thankful for all those guys; Coach Lacy, Coach Lehman – they’ve been there for me through everything. I’m also thankful for my football coach and basketball coach, Coach Maloy and Coach Byrum. They have really pushed me to be my best.”

“Coach Henry helped me a lot to be who I am as an athlete and person,” Reagan said of his American Legion baseball coach, Chad Henry. “That means a lot to me to have them in my life and have them around.”

“That is why we do this,” said Coach Henry. “We don’t do it for the money, we do it for the love of the game and try to give these kids an opportunity. I’m a firm believer it takes a village. It just can’t be one person trying to direct a kid; its coaches, its people that can influence them and that’s the most important part to see a kid come up from your community and go out there and make it.”

“I want to thank my parents for everything,” Reagan said. “They are the whole reason this is even possible to do what I love and that is all because of them. They helped me with funds and everything else and gave me the opportunity to make the best out of my life that I can. I love them with all my heart.”

“I’d like to thank the rest of my family and my girlfriend, Mariah Claywell for all her support,” Reagan concluded.