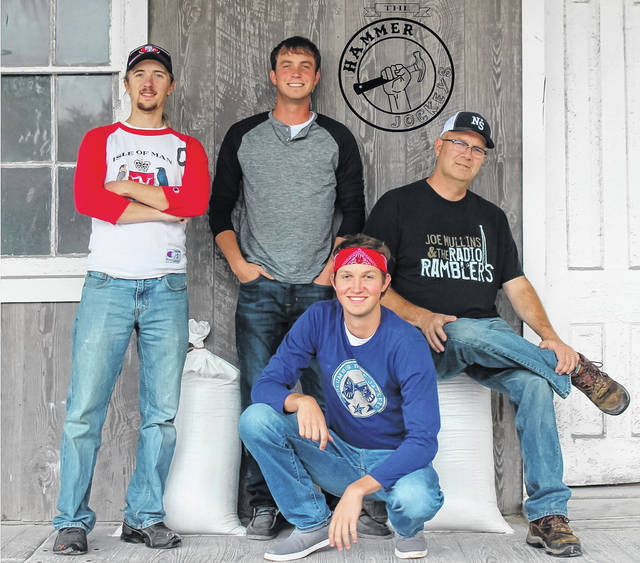 NORTH STAR — Music provides a sweet escape, but for this group, it brings them closer together.

The newly formed group, Hammer Jockeys, is a family group of two brothers, their dad, and another local musician, Dylan Platfoot, who plays the bass guitar. The love does not stop there as their sister, Emily, comes and sings songs with them as well.

“It gives us more of a range with our music,” multi-instrumentalist and vocalist Isaac Ruhenkamp said.

The group is exceptionally excited to play at the North Star Picnic, July 17, from 8 to 11:30 p.m. because they are not only able to play for their hometown atmosphere, but the members of the group are heavily involved with the festivities

Isaac and Lee Ruhenkamp, the drummer, are part of the electric committee, and Steve “Doc” Ruhenkamp is the entertainment director and takes care of the softball tournament.

“The whole family’s involved,” Doc said. “We even pick up cans on Sunday.”

The group of four say it is important to give back to the community, and the people around have been supportive. However, they would not be where they are today without those working behind the scene.

“We like to give credit where credit is due,” Doc said.

Andrew Heckman works hard to run lights, sound, and social media platforms by taking pictures and videos for the group. Not only does Heckman work for the group, their first cousin Ben Wendlyn helped produce demos.

The demos Wendlyn produced for the group can be found on Spotify. Look up “The Hammer Jockeys Band” to hear their original songs “Hey,” “18 Years of Summer,” and more written by their very own Isaac.

“They (Heckman and Wendlyn) do a ton,” Doc said. “They are a big key to our success.”

The Hammer Jockeys are excited to be able to perform locally stating they are most excited to entertain friends and family, but they are not the only entertainment at the picnic.

The North Star Picnic begins Friday July 16 and runs through Sunday July 18. Activities include a softball tournament, live music, a parade, diaper derby, and more. So come dressed for the weather and enjoy a weekend of fun.

For the North Star Picnic schedule go to The North Star Community Center Facebook page and click on photos. For more on Hammer Jockeys, follow the band on Facebook at The Hammer Jockeys. Any questions or business inquiries can be directed to Doc at 937-417-2444 or Isaac at 937-467-1349.