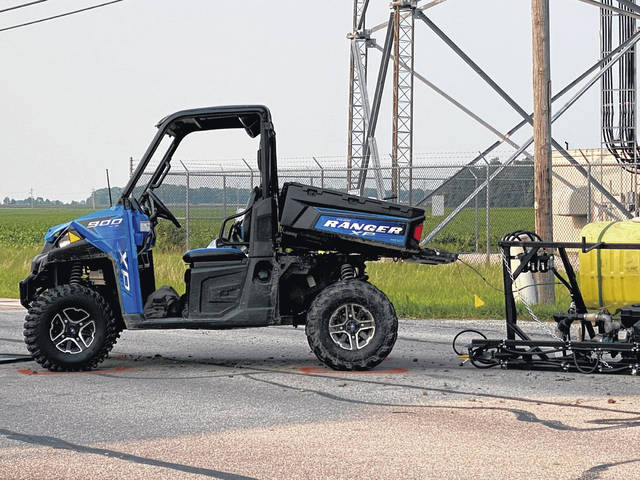 ARCANUM — An Arcanum man was airlifted Monday evening following an ATV accident that ejected from from his vehicle.

At approximately 6:05 p.m., emergency personnel from Arcanum Rescue, Tri-Village Rescue and New Madison Fire Department responded along with CareFlight and Darke County Deputies to the intersection of U.S. Route 127 and Otterbein-Ithaca Road in reference to a two vehicle injury crash involving an ATV.

According to the Darke County Sheriff’s Office, a blue 2016 Polaris Ranger, driven by Robert Finkbine, 51, of Arcanum, was traveling west on Otterbein-Ithaca Road when Finkbine failed to notice and pulled into the pathway of oncoming traffic in an attempt to cross U.S. Route 127. A red Ford F-150 traveling northbound on U.S. Route 127, driven by Joshua Petitjean, 48, of Bradford, struck the Polaris Ranger resulting in Finkbine being ejected from the vehicle.

Finkbine was treated at the scene by EMS prior to being airlifted by CareFlight to Miami Valley Hospital for non-life threatening injuries. Petitjean and his juvenile passenger were examined on the scene and found to be not injured and refused any further treatment and transport to a medical facility.