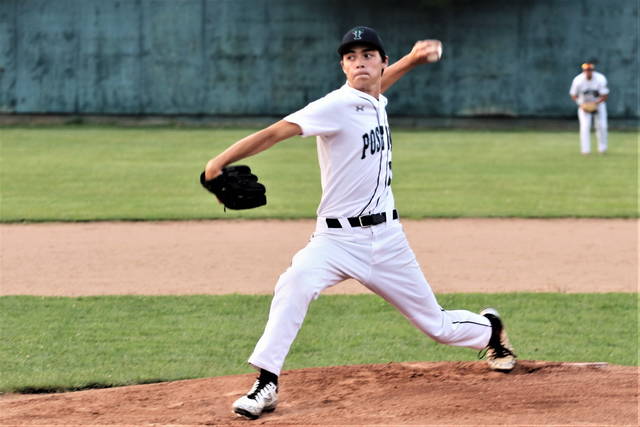 GREENVILLE – Greenville American Legion Post 140 baseball did it again – battled back in the bottom of the seventh to earn a walk-off win over Van Wert Post 178 to stay alive in American Legion regional tournament play in front of a large Sater Heights Park crowd.

“Last night we had a lot of guys out of position,” Henry said of the team playing shorthanded in the loss to Sidney. “We dropped that game.”

“Coming out tonight we had more of our guys back,” continued Henry. “We played defense the whole night, we put the ball in play, we looked confident at the plate and when one guy gets a hit and the next guy gets a hit – it’s just a lot of fun to be a part of.”

Once again it was Stephens drilling a RBI single to center giving Post 140 a come-from-behind win in its last at-bat to keep the season alive for the locals.

“Defensively he didn’t have it the other night and for that kid to come out here – he has now walked off two games of this tournament,” said Henry. “He’s a quiet kid, doesn’t say a lot, he just rakes.”

Greenville took advantage of a Van Wert error to take an early 1-0 lead after one-inning of play only to have Van Wert plate two-runs in the top of the second and a single run in the third to lead 3-1.

The teams played scoreless ball through the fourth, fifth and sixth innings with Greenville starter, Mississinawa Valley’s Xavier Manning keeping the visitors in check. With the pitch count in play, Manning was lifted with Coach Henry going to 2021 Ansonia high school freshman Keegen Weiss to pitch the top of the seventh.

“One of Xavier’s best appearances was early in the season when he was on a low pitch count because we didn’t have him built up,” Henry said of Manning not playing high school ball with MV not fielding a team for the 2021 season. “He kind of struggled getting things going. He would show flashes of brilliance for a couple innings but he couldn’t put it together but tonight to go six-innings the way he did against that team as well as they hit the ball, it was a tesiment to the kid.”

He stuck around, he’s watched other people get the starts over him but he came out when he had to and he carried this team on his back tonight,” added Henry.

“Unreal,” Henry said of Ruhenkamp’s play. “Defensively he’s been awesome in this tournament.”

“A fly ball to Greenville’s Alex Baumgardner in centerfield had Post 178 going down in order and bringing Post 140 to the plate for their last at-bat trailing by two.

“He was double-rostered between the junior team,” noted Henry. “He had a really affective year on the junior team so we brought him up for numbers tonight because we didn’t know where we were with some of our arms and sure enough he got out there.”

“We kind of joked with him, ‘no pressure at all’ and he had a one, two, three inning,” Henry added. “He’s a freshman and just turned 15 years old a couple weeks ago – we’re going to have him for a long time. I’m really excited for the future of that kid.”

A strikeout to open the bottom of the seventh had Greenville down to two outs followed with a standup double to center off the bat of Baumgardner. Stastney lashed a run scoring double down the leftfield line to make it a 3-2 game.

“Logan was kind of down on himself,” said Henry. “We were talking, we just need you to get on base – you’re not the winner, you’re the tie. We just need you to get on base and he said, ‘what if I bunt’ and I said well, I asked you to bunt earlier and it was down the middle and you missed it so how about you just don’t think and you just go up there and hit – and to his credit he got down two strikes and that was a rope he hit down third base line.”

A second strike out had Post 140 down to its last out bringing Ruhenkamp to the plate to drill a game-tying RBI single to left and moving to second on the throw home.

Stephens stepped to the plate to make it back-to-back two-out run-scoring singles with a line drive to center giving Greenville Legion a 4-3 win – keeping the season alive for Post 140.

A big play of the night had Van Wert runners in scoring position at second and third with two-outs when a sky-high fly ball to center got lost in the lights with Baumgardner making a last-second recovery to make an over the shoulder circus catch to keep the score from getting out of hand.

“These lights can be pretty difficult when the ball goes up above the lights,” stated Henry. “We saw two balls fall in the infield earlier in the inning but that ball goes up it’s hard to find. That’s a long way out there in centerfield but he kept with it the whole time. Alex has been a horse on defense, he’s played well all summer. I couldn’t be more proud of him, I couldn’t be more-happy for him. He’s an excellent kid.”

Arcnaum 2021 sophomore Aidne Psczulkski may have gone unnoticed behind the plate by some in the win, but not to Coach Henry.

“He’s been incredible,” Henry stated. “His throw-out rate behind the plate has just been awesome. People can’t run on him and it’s really cool to watch.”

Xavier Manning started the game for Greenville with the southpaw going six innings, allowing three runs on six hits while striking out five. Weiss earned the victory in relief allowing no hits and zero, no runs and no walks over one inning of work. 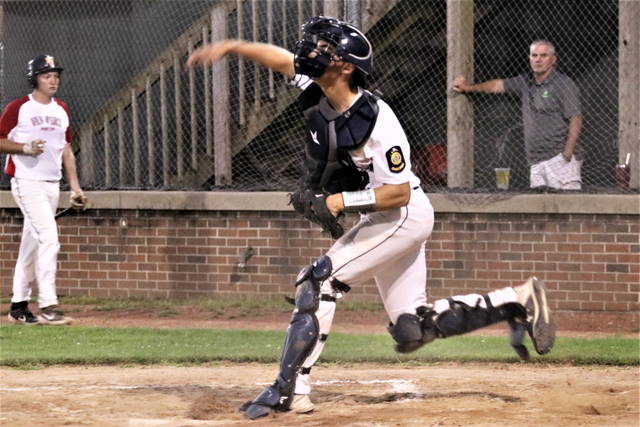 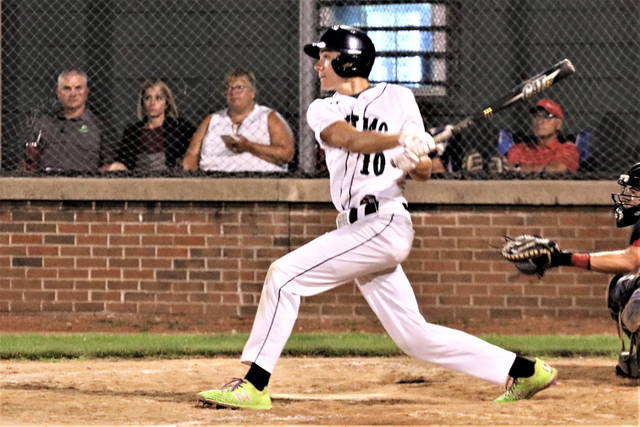 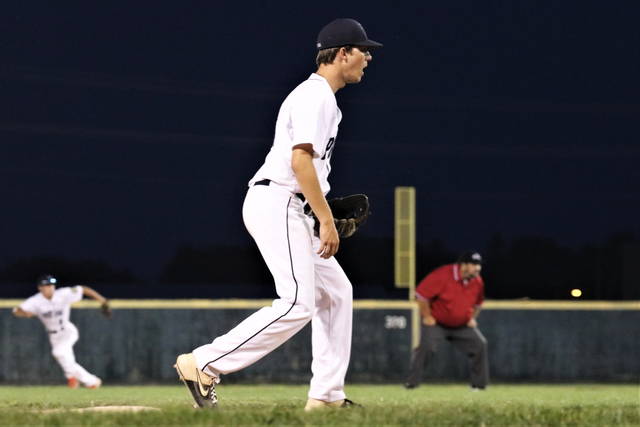 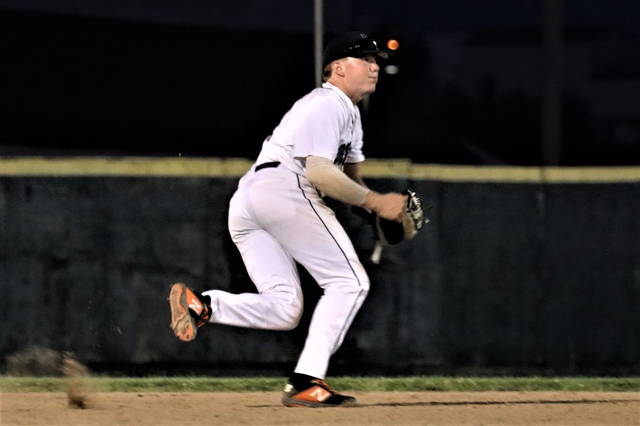 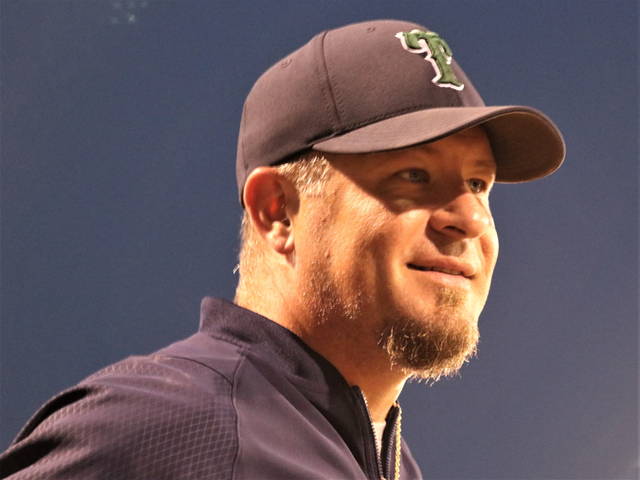 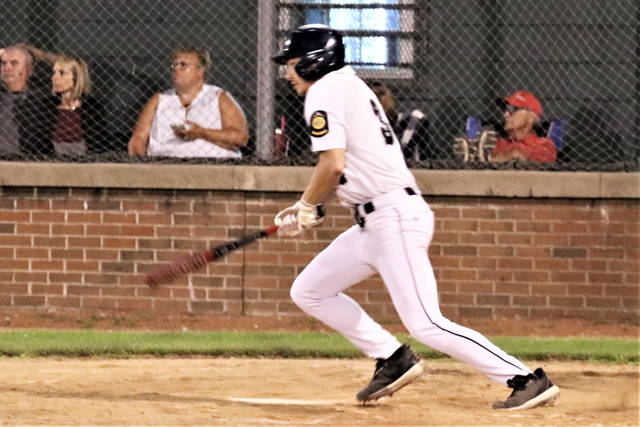 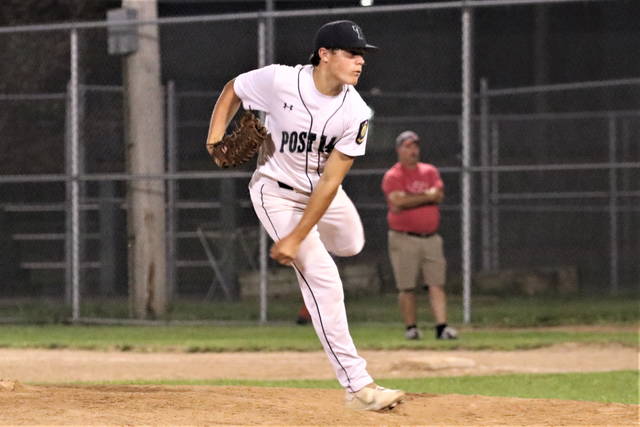 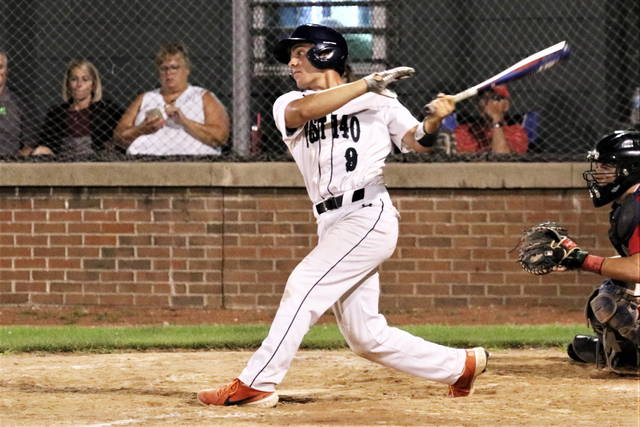