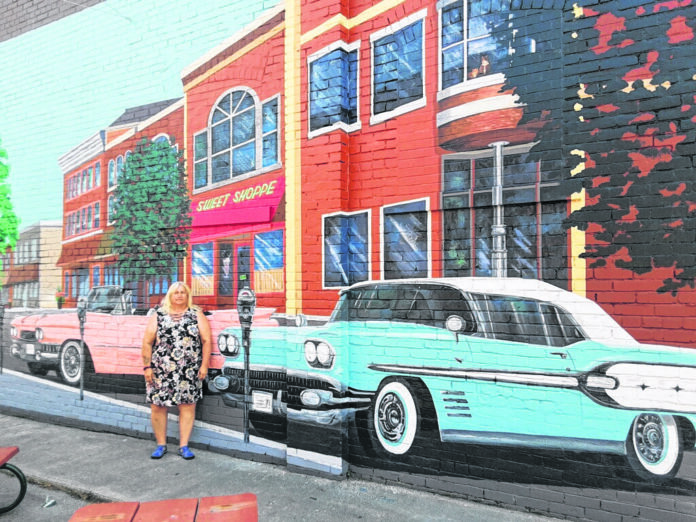 UNION CITY, Ind. — Art provides an outlet for the creative mind, but for two artists from Ohio, art is a way of life.

Typically, graffiti and street art is frowned upon, but it all changed when the Preservation Society of Union City, IN-OH, inc. had an alley art grant to fulfill.

Professional artists, Selena Burk of Union City, Ohio, and Phil Wood of Fort Recovery, Ohio, took on the task of spending their summer painting a large mural. The idea for a mural came from an idea by Thomas “Ted” Leahey in order to fulfill the grant.

In 2018, Burk and Wood painted two cars representing a 1950s-1960s theme. They took some vintage photos and designed a street scene around the cars with the idea of capturing a time period of long ago.

The mural is 18 feet tall and approximately 40 feet long. The artists started this task in the beginning of May and just recently finished.

This mural is located in the alley off of Columbia Street in Union City, Ind. There is going to be lighting above the mural for evening time viewing.

There are also tables for anyone to enjoy while having a bite to eat or to just visit with one another and enjoy the view. The artists enjoyed adding to the future development of adding beauty to this city.

The mural began with a Patronicity Grant from the State of Indiana awarded to the Preservation Society of Union City IN-OH, Inc. The money was for a matching grant and the intention of the grant was to create alley art.

The Preservation Society received the grant for the first part of the mural which included the two cars on the back of the same building of a StepVan. The StepVan was the delivery vehicle produced by the Union City Body Company.

These vans have been in use since the early 1950s and were sold across the entire United States and internationally. The design of the murals were to depict the downtown 1950s and early 1960s of Union City.

The streetscape was added as the second phase of the mural project because the grant could not be renewed for a consecutive year. The Society waited until 2020 to submit a grant request for its completion. 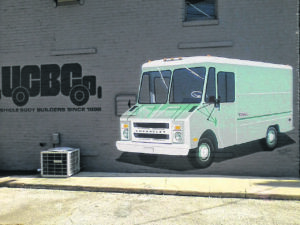 The StepVan has been around since the 50s. 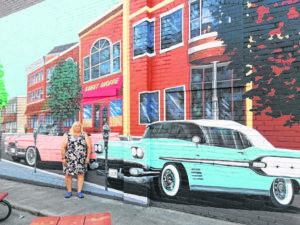 Selena Burk shows off her mural on the 200 block of Columbia Street.