GREENVILLE — On Tuesday, April 19, Greenville Mayor Steve Willman signed a proclamation for a local observance of the annual National Day of Prayer, held on the first Thursday in May. The proclamation stated in part, that the National Day of Prayer, “transcends differences, bringing together people of all backgrounds to humbly come before God seeking grace, and offering thanksgiving for freedom and blessings.”

In 1952, U. S. House and Senate introduced a joint resolution for an annual National Day of Prayer, “on which the people of the United States may turn to God in prayer and meditation at churches, in groups, and as individuals.” On April 17, of that same year, U.S. President Harry S. Truman signed a bill proclaiming a National Day of Prayer must be declared by each subsequent president, so that all Americans might be encouraged to pray.

The 71st annual National Day of Prayer will be held on Thursday, May 5. The Greater Greenville Ministerial Association will be sponsoring the local observance, in cooperation with the mayor’s office. The service is open to everyone, and will be held at the First United Methodist Church, located at 202 W. Fourth Street in Greenville, at noon. This year’s theme is “Exalt the Lord Who has Established Us,” based on Colossians 2:6-7, which states “As ye have therefore received Christ Jesus the Lord, so walk ye in him: rooted and built up in him, and stablished in the faith, as ye have been taught, abounding therein with thanksgiving.” (King James Version) 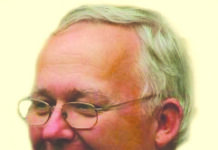