During the program, Buchy talked about his business and political careers, a few of his achievements, and the underlying motivation for it all: “faith, family, and freedom.”

“My first job was sticking hogs when I was 13, and I’m not talking about sticking them with blue ribbons,” Buchy said. Buchy Food Service was founded by his great-grandfather in 1878, and stayed in the family for five generations. Buchy served as President and CEO of the company from 1977 until 2012, when it was sold to Sysco.

Buchy has lived in Ohio most of his life, having graduated from Greenville High School, and Wittenberg University. However, it was while he worked in an Italian sausage company in San Jose, Calif., for four years in the 1960s, that he met his wife, Sharon. They returned to Greenville to raise their family.

Buchy then related the circumstances surrounding his entry into politics, and public service. In the 1970s, Democrats held most public offices in Darke County. Judge Howard Ely, one of the few Republicans, retired before his term was over, and Judge Lee Bixler, a Democrat, was appointed to take his place. “He turned out to be a wonderful judge,” Buchy stated, “but it was the process by which he came to office that was an issue.” It galvanized several prominent Republicans in the county, forming the Darke County Republican Men’s Club.

Another such turning point came when the superintendent of Greenville City Schools, Everett Potts, refused to resign amid turmoil at the Board of Education . Two board members subsequently resigned, and Buchy was appointed to one of the vacancies. The district was in a deficit situation, so he had to make some difficult decisions: Washington Township and Gettysburg schools were closed, and the cafeteria was turned over to a private company, offering no more free or reduced-price lunches. These actions upset many families, but he was reelected to the school board, attributing his success to door-to-door campaigning.

In 1982, Rep. Robert Netzley (OH-43) encouraged Buchy to run for the Ohio State House, representing the newly created 84th District. Republicans were a minority at that time, and Netzley served as a mentor, advising, “you can get a lot done if you don’t get excited. Do your work in committee: try to make bad law not so bad, and good law even better. On the floor, you’re going to lose; just laugh and say ‘see you tomorrow.’”

Buchy learned quickly, recalling his first experience on the State House floor. “There are two things you don’t want to see made: sausage, and law,” he joked. “Sausage is a hell of a lot cleaner than law.”

According to Buchy, one of his biggest accomplishments was supporting legislation that moved livestock permitting from the jurisdiction of the Environmental Protection Agency (EPA) to the Department of Agriculture. “EPA stands for Eliminate Productive Activity,” Buchy stated. “The Dept. of Agriculture works with you and helps you to fix problems; the EPA just wants to punish you.” The Division of Livestock Environmental Permitting (DLEP) regulates the construction and operation of Ohio’s largest livestock and poultry facilities.

Buchy fought against tax increases, twice stopping proposed hikes. “We don’t have a revenue problem, we have a spending problem,” he explained.

Buchy also ensured there would be minimum live racing days at every track at the racinos. “It’s not about betting, it’s about agriculture,” Buchy said, convincing his fellow legislators to support the bill. As a result, Ohio is the number one harness horse-producing state in the country.

Buchy later served as Deputy Director of the Ohio Department of Agriculture, under then-Ohio Gov. Bob Taft. During the three-year period from 2001 to 2004, Buchy was able to reduce the department budget by $4 million, consolidating divisions, while keeping the best food safety standards in the country.

These days, Buchy advocates for racehorse adoption, through New Vocations, which has saved 7,000 former racehorses from potentially ending up in slaughterhouses. Additionally, education and family continue to be the focal points of Buchy’s life mission.

“We’ve committed the worst child abuse by shutting down schools,” Buchy said. Out of Ohio’s 608 public school districts, all but eight had drastically lower academic scores after the lengthy closures imposed by state officials, in response to coronavirus. One Darke County school district, Versailles, saw their academic ratings increase, which Buchy attributes to strong families in this part of the state.

Buchy closed by urging everyone to vote in Ohio’s upcoming second primary election, on Aug. 2. 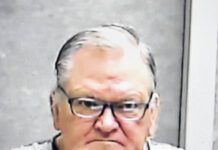 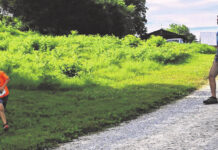