Wuebker is a fifth year member of Versailles FFA and a 2022 graduate of Versailles High School. She is the daughter of Jeff and Dena Wuebker of Versailles. She is a National FFA Proficiency Finalist in the area of Ag Communications. Her SAE is job placement at WTGR Radio Station in which she serves as a co-farm news director.

York is a 2022 graduate of Versailles High School and a fifth year member of Versailles FFA. She is the daughter of Dan and Abby York and Mindy and Kevin Kissinger. York is a National FFA Proficiency Finalist in Diversified Horticulture. Her SAE consists of a school bus that she has converted into growing and selling mums and annual bedding plants. In addition, she has also worked at Versailles FFA greenhouse.

Winner is a fourth year member of Versailles FFA and will be a senior at Versailles High School in the fall. Winner is a National FFA Proficiency finalist in Beef Placement and is the son of Brian and Lisa Winner. His SAE is a job placement at Brian Winner Beef Farm and he serves as a beef herdsman of the operation.

The 20-page proficiency application students submitted included: goals, plans of practices, pictures, letters of recommendations, financial records and hour documentation. They will go through an online interview with final placing being announced at the 96th National FFA Convention. Each finalist will receive a $500 check from their sponsors along with the National FFA proficiency winner in each 49 areas will receive an additional $500. 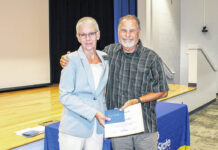 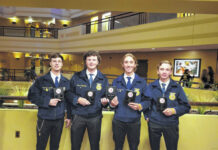 Education for counselors and social workers