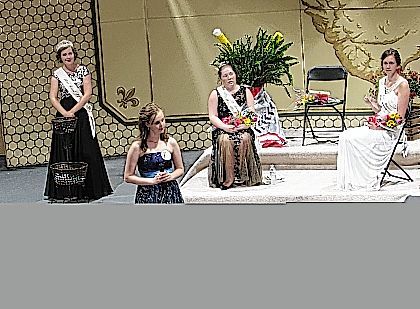 The 2015 Miss Chick stands with her court and the chairman of this year’s Poultry Days after the crowning ceremony Saturday afternoon. They are, from left, first runner-up Taylor Stover, daughter of Eric and Julie Stover; 2015 Poultry Days Chairman Brian Pearson; Miss Chick Christa Puthoff, daughter of Steve and Marlene Puthoff; and second runner-up Rachel Osterloh, daughter of Luke and Sharon Osterloh.

VERSAILLES — After a round of personal interviews and two rounds of questions for 10 candidates in front of a packed house at the old high school gym, Christa Puthoff was crowned Miss Chick for Versailles Poultry Days 2015 on Saturday afternoon.

Puthoff is the daughter of Steve and Marlene Puthoff. She was sponsored by St. Denis Youth Ministry.

This year’s second day of competition, after Friday’s personal interview round, was changed, so that after the first round of questions, the field was not narrowed to five, and all 10 contestants had a second question to answer.

Questions covered such topics as parental responsibility with kids and social media, the impact of Disney films on young women, the gender gap in wages earned, and the most important advice to give to a child.