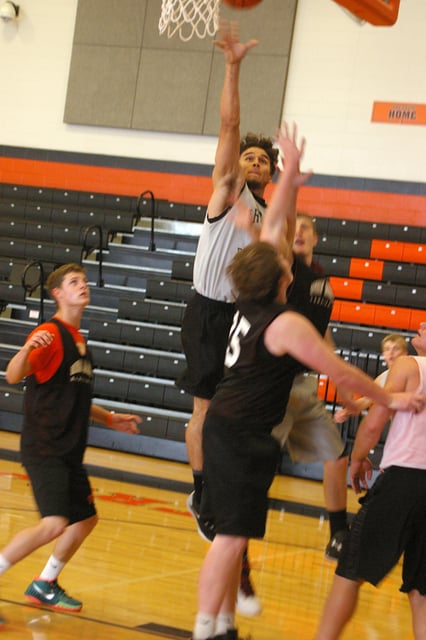 Arcanum’s Austin Baker bounces a pass past Ansonia defenders during a boys basketball scrimmage on Wednesday in Arcanum.

For the host Trojans it was the continuation of an already busy summer as they spent a couple days in Bluffton for a shootout and hosted Tippecanoe and Troy Christian in a scrimmage last week.

“We’ve had a really, really good summer,” Arcanum coach Marcus Bixler said. “Today we didn’t play as well as we have most of the summer. And there’s been some other things going on with the guys – they’re at a leadership conference doing some other things – so we were a little bit flat I thought, especially early on. But we’ve got guys in a lot of new places right now and some new faces on there, and this has been a good opportunity. And what I appreciate is those guys are committed. They’re in here five days a week working. So I’ve been really, really pleased with the overall progress throughout the summer.”

In the second go-around, National Trail handed Ansonia’s its first loss of the day, 10-2. Arcanum then recorded its first win with a 12-2 victory against National Trail. Then Ansonia beat Arcanum 13-10.

In the final round of matchups Ansonia beat National Trail 19-8. National Trail then beat Arcanum 15-13. In the day’s final game Arcanum beat Ansonia 7-6.