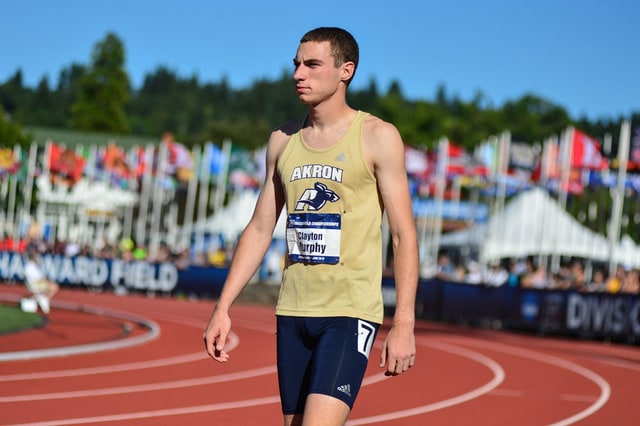 Tri-Village graduate Clayton Murphy, a sophomore at the University of Akron, earned U.S. Track & Field and Cross Country Coaches Association first team all-American honors this season for third place finishes in the 800 meters at the NCAA indoor and outdoor track and field championships.

AKRON – Having already established himself as one of the top distance runners in University of Akron history, Tri-Village alumnus Clayton Murphy is focused on continuing his phenomenal career with more championships and records.

Murphy recently completed his sophomore season at Akron with a third place finish in the 800-meter run at the NCAA outdoor championships. He finished with a time of 1:49.52, just 0.26 seconds off the pace set by national champion Edward Kemboi of Iowa State University.

“It’s pretty cool,” Murphy said of finishing third in the nation. “It’s very tough to succeed in an event like the 800.”

Murphy also finished third in the nation in the 800 meters at the NCAA indoor championships, completing the race in 1:47.06.

Murphy isn’t surprised by the amount of success he’s had in college but did say it’s come a little sooner than he anticipated.

“It was good,” Murphy said of his success this past season. “I’m real happy with the cross country season all the way through the outdoor season.”

The Tri-Village graduate owns program records in the 800 meters, 1,500 meters, mile and 4×400-meter relay. The 1,500 record was one of the oldest in program history and one Murphy is especially proud of.

“That was probably one of the hardest ones to get,” he said.

Murphy is now turning his focus to the upcoming cross country season. The Zips have never won a MAC championship in men’s cross country, and Murphy wants to lead them to their first conference title and put them in position to make nationals.

After the cross country season concludes, Murphy will turn his focus to track and field. He wants to break Akron’s outdoor record of 1:45.92 in the 800 meters.

Murphy and teammate Shawn Barber, a national champion in the pole vault, also want to lead the Zips to a top five finish in the NCAA championships.

And personally, Murphy hopes he can win a national championship by the time his career is finished.

“That’s always the goal to win it all,” he said. “I think this year set myself up and learned a lot from the trials and errors I had this season.”