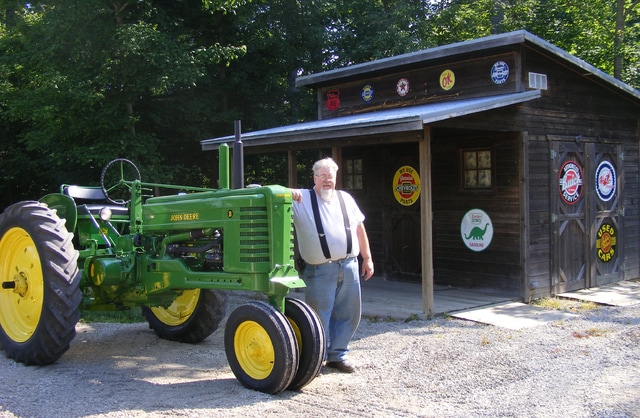 ROSSBURG — Father’s Day naturally honors fathers and that’s what Ron Stump has done for his own dad, the late Clarence Stump.

Ron, a mechanic, recently finished restoring his father’s John Deere tractor and just knows his father would be proud since the vehicle was his father’s pride and joy.

“I’m sure dad would come down proud as a peacock,” Ron said. “There is no doubt in my mind he’s smiling from ear-to-ear.”

“I told my dad I wanted it, but he said I’d have to wait for the sale,” Ron winced. “Dad paid $2,309 from Bailey Hardware [then in Ansonia]. He got with it a two-row cultivator and a sickle bar mower. He was so proud of this. He carried the card in his wallet.”

Ron, who was executor of his father’s estate, said he also found a mortgage which the elder Stump took out on the tractor in Greenville. Also among his father’s belongings were the original owner’s manual and a piece of advertisement with it that he was offered $1,o00 for but wouldn’t even sell that.”The John Deere was his pride and joy,” Ron said. “He had it painted twice. He and Albert Hummel put a yellow stripe on it and later on Bob Bateman painted it. Mike Bulcher painted it the last time. It is a 1952 John Deere and he bought it on Aug. 9, 1953. The way it is now is the way it was in the factory. This was his main tractor of all time. I told Dad I always wanted this tractor and always called it mine, but it never was mine.”

Ron said his father had two other tractors which they changed over to 12-volt systems from six volts.

“He wouldn’t let me do this one. He did it,” Ron said. “Dad tried changing it over but the reverse polarity on the battery that you have to do, he didn’t know. It burned the wiring off of it. It never ran after that.”

Ron said he has three times as much in the tractor as he paid for it at auction.

“It doesn’t make any difference, it’s my dad,” he said.

Ron worked with his father on an 80-acre farm in the Lightsville/Rose Hill Area.

After his father retired from farming, he rented his farm out.

“Everything had his mark on it, even the buildings on the farm,” Ron said.

“The barn was moved from Woodington and he added on to the back,” Ron recalled. “”He always had truck patch on six acres, mowed hay and raised a few steers here and there.”

Ron suggested to his father that he sell the farm and move to town after his mother, Pearl, died on Jan. 22, 2004.

“He said, ‘They’ll carry me off this farm,’” according to Ron. “He lived with us [Ron and wife Bev] and then he had strokes and had to go to the nursing home.”

“He served in World War II,” Ron said. “He was quite a guy. He had five children. All of us helped out on the farm growing up. I had to fix the equipment. Dad always said, ‘You never broke nothing if you done nothing but you never had to look so busy’.”

The Stumps sold one tractor before Clarence’s passing and Ron bought the other two at the sale.

“Dad and I built the 1979 Case tractor,” he said. “I’ve been trying to buy his first John Deere but my uncle won’t sell it to me. This was his third John Deere He always wore a John Deere hat. He just liked John Deeres.”

At the estate sale, which was held April 25, 2000, Ron said he was bound and determined he was going to buy the tractor.

“I was bidding against three or four guys,” he said. “I wanted it bad.”

Ron, who turned 60 on March 26, won out, and started working on it little by little since September 2010.

“I had to take the transmission to Urbana for John Warner to work on it. It took a special piece,” Ron said. “I took the tranny over in July and he called me the following year in September. I spent better than $1,000 on the transmission but it was Dad’s tractor. I wired it and got in running and changed it back to six volts like the original.”

Wife Bev is pretty supportive of her husband, even though he spends a lot of time in his work just as she does.

Ron plans to have the tractor at York Woods during the Darke County Steam Threshers Reunion and, of course, at the Portland tractor show which is featuring John Deeres this year.

He’s not sure if it is going to be featured in the Ansonia Fourth of July parade this year, but does know that he is hauling the grand marshals through the parade in his bright red, 1966 Impala convertible. He took the Versailles Health Care King and Queen through the parade last Saturday during the Poultry Days parade.

Working on the tractor was not an issue for Ron, who graduated from Mississinawa Valley High School in 1974.

“There were no obstacles at all…the only one is money,” he laughed. “I have been a mechanic all my life.”

Ron is already contemplating whether or not to redo the Case tractor.

“The John Deere was a real labor of love, because I know Dad loved that tractor.” he said. “When the wires burned, it took the wind out of his sails. He had used it to mow hay, and then it just sat there in the barn.”

He knows one thing. “It’s definitely not for sale,” he said adamantly.

Ron is now semi-retired and said he picks and chooses what he does now.

His mother, too, was a special parent.

“She was born with one arm but she always said she was never handicapped. She would say, ‘A handicap is when you have something and lose it. I never had it.’,” Ron recalled. “Never tell her she couldn’t do anything. How she diapered the twins [the oldest of the children] with one hand, I don’t know. And, how did she peel potatoes, put her hair up in pin curls, snap beans, drive a stick shift and drive tractor? She was quite an amazing woman. There was nothing that woman could not do.”