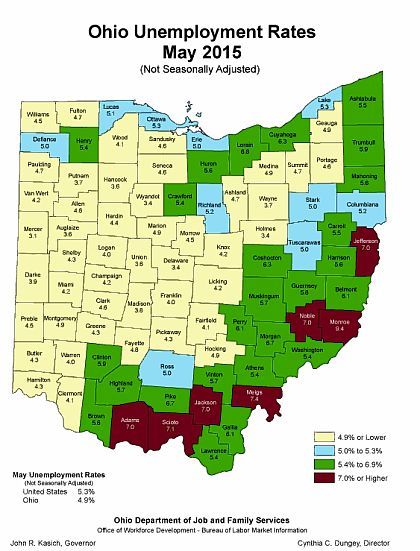 DARKE COUNTY — Unemployment numbers increased in 55 of Ohio’s 88 counties from April to May, but Darke County was not one of them. The local unemployment rate held fairly steady, shifting downward slightly from 4.0 percent in April to 3.9 percent in May, according to information just released by the Ohio Department of Job and Family Services Office of Workforce Development, Bureau of Labor Market Information.

The statewide seasonally adjusted unemployment rate held at 5.2 percent from April to May, which is a half percent better than the rate a year ago.

The civilian labor force in Ohio increased by about 3,000 from an estimated 5,750,000 workers in April to 5,753,000 in May, with the labor force participation rate at 63 percent. The population of working age people in the state increase by about 4,000.

Four counties had unemployment rates below 3.5 percent in May. The counties with the lowest rates, other than Mercer, were Delaware, Holmes and Wyandot at 3.4 percent for all three.

Seven counties had unemployment rates at or above 7.0 percent in May. The counties with the highest rates, other than Monroe, were Meigs, 7.4 percent; Scioto, 7.1 percent; and Adams, Jackson, Jefferson and Noble, 7.0 percent.