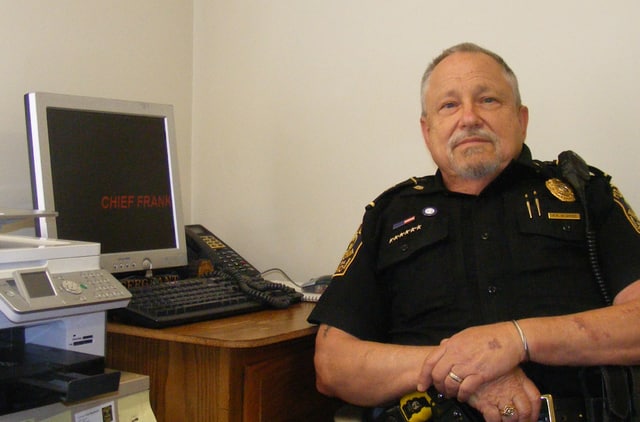 ANSONIA — Ansonia Police Chief Frank Shapiro has thrown his hat in the ring to run against Darke County Sheriff Toby Spencer in the March 2016 primary election.

“I was asked by several people in law enforcement in the community to run,” said Shapiro, who has been chief at Ansonia for six years. “It caught me by surprise. I have done nothing political all my life and I don’t know if I’d make a good politician.”

Nonetheless, he talked it over with wife Tammy, got her blessing and began looking into it.

“She said she would support me all the way,” he said.

Running on the Republican ticket, Shapiro went to the Darke County Board of Elections at the end of May

“I’m the first one ever to oppose him,” Shapiro said of Spencer. “I have nothing against Toby.”

He said if elected, Shapiro has a number of things he would like to change within the sheriff’s office.

“I’d like to restore relationship with the sheriff’s department with the city of Greenville and the five other villages with police departments — Ansonia, Arcanum, Versailles, New Madison and Union City,” he said. “For the most part, though we all have mutual aid, it seems the relationship between all departments is very poor.”

Another thing he would like to see done is more training.

“I would like to see it take more center stage, especially in the light of events taking over in the past year,” he said. “It’s very disappointing to see some departments lax in training. I’d like to have the sheriff’s department train all five villages.”

Shapiro himself is currently training at the Montgomery County Training Center.

“Everybody gets the same education,” he said. “It’s a massive event, and all would be involved. I’m really big on training. It’s very physical. The training entails anything to do with weapons, firearms, force-on-force and one-on-one training…whatever is presently by Ohio Peace Officers Training Academy standards. I’ve been doing that ever since I became a police officer. I like the training program so I continued when I came up here.”

Before coming to Ansonia, he served as a patrol officer for Butler Township (Vandalia area) Montgomery County. He got involved with the detective side, then was a shift supervisor and a watch commander.

“Over the years, I wore many hats,” he said. “I was even one of their first public information officers and was seen on television being interviewed.”

He has worked a lot of cases, but he particularly remembers the bomb scare which was investigated at the elementary school across from the police department, which fortunately turned out to be a hoax.

He indicated he has never faced any obstacles while on the police force.

“I always felt comfortable,” Shapiro said. “I always had plenty of back-up and never felt like I was alone. Here [at Ansonia], the closest back-ups we have are Versailles, Greenville or the sheriff’s department.”

Shapiro, who has been a police officer for some 30-odd years, feels it’s to his advantage in the race for sheriff is that he was also successful in the private sector before that.

“I managed 200 employees in a couple of other states,” he said. “Anything to do with labor relations or governing agencies I needed to deal with all of these people. So I’m ready for it.”

He also announced that he would like to see the sheriff’s auxiliary “back to its strength.”

“And, finding the right people can be done,” he said.

Why did he choose to work in Ansonia?

“My wife and I were talking one evening and she told me about Ansonia needing a chief,” he said. “She said she thought I ought to put in for that. I thought about it, applied and got hired. I thought that would be a cap in my career … being a chief for a small town.”

Before coming to Ansonia, he worked for the Butler Township Montgomery County for 27 years and retired from there when he came to Ansonia as chief, taking over the post vacated upon the death of Chief Larry Hoffman.

“I had lived in Darke County nine years anyway, having moved here before that I retired from Butler Township,” he said. “My wife is a lifelong Darke countian.”

Shapiro said one of the first things he did while chief in Ansonia was to write a policy, which previously did not exist.

“I spent from August to November 2009 writing a policy,” Shapiro said. “I got it approved and opened for business in November.”

He said, surprisingly, many of his cases now involve juvenile sex crimes.

“There are more than I’d like to think,” He said. “We’ve investigated a number of child-related sex crimes.”

The theft of the tiger, made by local students, a couple of years back was another one of his cases.

“I didn’t think it was a big deal at the time but then I realized that a lot of time was put into making it,” he said.

The tiger and three other life-size animals like it were made by school students and placed in various areas in town. The tiger was placed in front of the Ansonia Lumber Co. when it was stolen.

“But, we got the people charged and recovered the tiger,” the police chief said.

He also noted that like other communities across the country, Ansonia is plagued with drug problems.

“The entire country is enveloped in serious drug problems” he offered. “There is a surgence of methamphetamines and you can buy heroin cheaper than a lunch.”

He said if he becomes sheriff, he would keep at least two detectives who are dedicated to active drug investigation on board, depending on the budget.

“Trying to stem the drug problem is my primary goal,” he said.

In the meantime, he serves on the Darke County Communication Committee, representing the five villages that have police departments, for the new countywide radio system. He is also a member of the Fraternal Order of Police.

In his spare time, Shapiro likes to devote as much time as he can to his wife.

“And, I ride my motorcycle occasionally,” said Shapiro, who spent a lot of time in the Troy area when growing up.

He is as ready as he ever will be in his campaign for sheriff.

“It’s always tough to fight an incumbent sheriff but I’m prepared, I guess,” he said. ‘“I’m going to give it a good shot.”

He said he will continue his work as Ansonia police chief if and when he is elected sheriff.

“The first thing I did was to go to the mayor and tell him of my decision to run for sheriff,” Shapiro said. “”It won’t affect my duties here. I won’t be giving campaign speeches.”

Candidates for public offices have until Dec. 16 to file petitions for the March primary.

Spencer has only had one other opponent for the office in his history. That was his first year and it was against Sheriff Robert Sullenbarger.

Spencer has worked for the department for 40 years , the last 22 1/2 as sheriff.