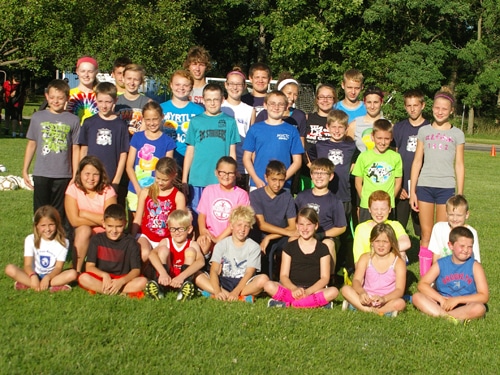 The camp was split into two groups with almost 60 3 to 8 year olds taking part in the first session and almost 30 9 to 14 year olds participating in the second session. The coaches and high school athletes from the Greenville High School boys and girls soccer teams led the camps.

“They’ve done great,” DCSA President Dave Ernst said of the high school players leading the camp. “It’s a great experience for them because they’re giving back to 3 to 14 year olds, and all these little kids out here who are playing look up to these kids. And hopefully they’ll come and watch them at the stadium and then they’ll grow and watch them. This is the future of Darke County soccer whether it’s Greenville or it’s FM, whoever has high school soccer.”

This is the first year DCSA has held the youth camp. The idea came about after the nonprofit organization experienced horrible weather during its spring season, Ernst said. Thus, the free summer camp was a way to get its youth athletes some more time to play and work on their skills.

Through the three-day camp, the youth players have shown tremendous growth, Ernst said.

“There’s been some pretty marked improvement in some kids from even just the beginning of the drills to the end of the first night and carryover,” he said.

The camp is focusing on fundamentals with an emphasis on passing and trapping. Those are skills required of soccer players at any level, Ernst said, and ones that high school teams have to dedicate time to.

“If every camper came out of the three nights being able to pass and trap a ball and understand those two things, every high school coach would be happy,” Ernst said. “Even at high school they’re teaching kids how to trap and pass a ball.”

DCSA will host a drop-in training program on Sunday nights in September and October and will host its spring season next year as well.

For more information about DCSA and its programs, visit its website at darkecountysoccer.com, email [email protected] or call 937-459-7967.